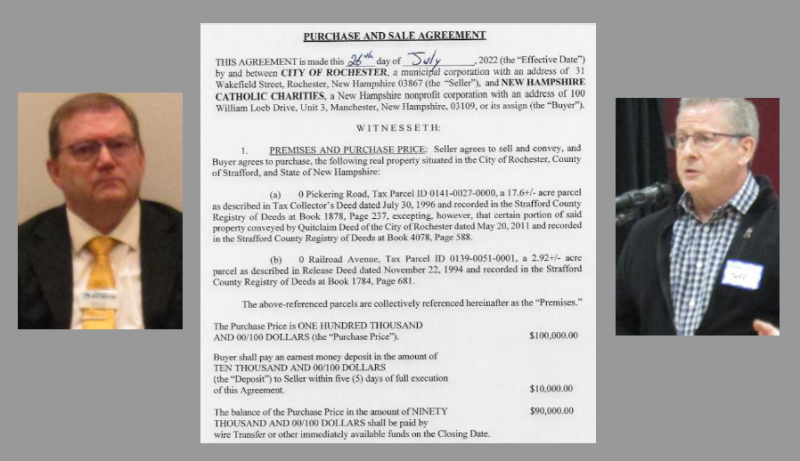 A partial screenshot of the purchase and sale agreement for the Brickyard, which names City Manager Blaine Cox and Jeff Leftovich as parties to the agreement. Signing for Catholic Charities was Thomas E. Blonski, Pres. & CEO. (Rochester Voice file photos)

Catholic Charities USA is the largest U.S. social safety-net provider outside the federal government, and one of the primary facilitators seeking to provide housing for immigrants entering this country illegally.

According to Wikipedia, Catholic Charities revenues in 2010 were almost $5 billion, with almost $3 billion of that coming from the federal government from taxpayer dollars.

Meanwhile, Catholic Charities of New Hampshire's Jeff Lefkovich, chief of real estate services, told The Rochester Voice last week that a 12-month purchase and sale agreement on the brickyard property signed last summer does not guarantee sale of the property but only allows him to do "due diligence" to determine if the project is feasible for a 150-unit apartment complex.

He said he could not divulge the price on the purchase and sale, but the document obtained by The Voice as a result of a Right to Know request shows it as $100,000, with the nonprofit putting down a good faith $10,000 deposit as part of the agreement.

The nine-page document is pure legalese and notes a seller's default on the agreement could allow the buyer to "enforce specific performances of Seller's obligations under this Agreement if the nature of Seller's default has not rendered specific performances unavailable; or "terminate this agreement, whereupon Buyer shall receive a return of the deposit and neither party hereto shall have any further rights or obligations hereunder; and buyer shall recover from seller all of buyer's reasonable out-of-pocket expenses incurred to the date of such termination."

The Rochester Voice asked for clarification from City Attorney Terence O'Rourke on whether the July 26 document, signed by City Manager Blaine Cox, held the city harmless if City Council voted not to purchase the property as happened with 181 Highland St. when councilors revoted to purchase the property under the likely threat of a lawsuit after previously turning it down during the same July 5 meeting.

With the help of enormous amounts of federal dollars, Catholic Charities USA is among the prime players in housing and integrating illegal aliens across the United States.

While many would see the wave of illegal immigrants as a threat to our nation due to human trafficking, fentanyl trafficking that is killing 300 Americans a day, acceptance of criminal aliens within our borders and empowerment of criminal cartels, Catholic Charities finds it abhorrent that Americans would rail against any tamping down of border crossings.

"Treating children of God as political pawns is unbecoming of any elected official, especially when it involves marginalized, suffering people," Chicago Cardinal Blase J. Cupich said in a Sept. 2 statement as Texas Gov. Gregg Abbott began sending busloads of illegals there to publicize the type of influx they see from the southern border every day.

It should be noted that Lefkovich stated unequivocally on Thursday that if the Brickyard property is developed into a low-income apartment complex, it will have no section 8 housing.