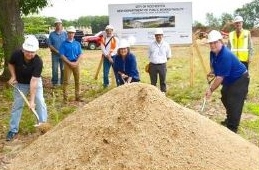 The new facility on a 22 acre lot at 209 Chestnut Hill Road will be home to the administration, work crews and equipment for the city's largest department.

The $20 million complex will contain 55,000 square feet of administrative, engineering, shop and vehicle maintenance area. It will also contain a communications station for emergency services. The Public Works Department consists of 65 employees who maintain city roadways, water and sewer utilities, and public buildings and grounds. The current public works facility at 45 Old Dover Road was built in 1950.

"Our current facility has limited area and was built to meet the needs of a rural city of the late 1940s." said Nourse. "In the last seven decades the population of Rochester has tripled, its transportation and utility network has greatly expanded and environmental regulation has significantly increased. Our current facility was built as maintenance garages and has been modified over the years to accommodate administrative offices and additional equipment, but its ultimate limitations are significant. There are no meeting spaces and common areas are used for equipment and supplies. The building lacks life safety systems and has structural issues."

One of the features of the new facility is a vehicle maintenance and storage bay. This feature will allow large vehicles and equipment to be housed indoors when not used.

"This will allow us to maximize the lifespan of our most costly vehicles and equipment such as large dump trucks and loaders," Nourse said. "It is also the least costly component of the facility."

"The City Council is very excited to move forward on this greatly needed project.", said Mayor McCarley. "The Public Works Department plays a critical role in quality of life for residents and businesses of our growing city."
The city started the process of replacing its current facility in 2013. Several city-owned properties were studied but were ruled out due to location and/or lack of buildable area. The Chestnut Hill Road site became an opportunity in 2018.