City planner in missive to NH Listens: They 'came out with pitch forks in hand" 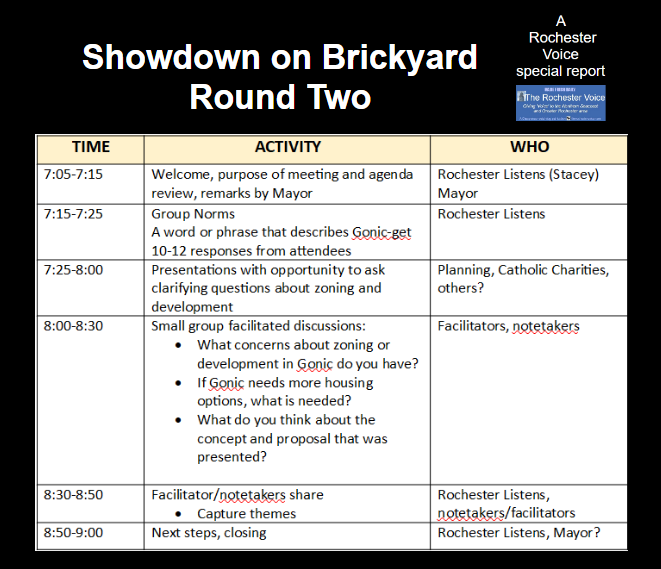 The tentative agenda produced by the city and NH Listens for Sept. 22 meeting on Brickyard housing project.

ROCHESTER - Rochester Mayor Paul Callaghan refused this week to explain how a third-party "facilitator" became involved in a Sept. 22 meeting at the Gonic School to discuss a proposal to bring an 180-apartment complex to the former Gonic Brickyard, but a proposed meeting "Agenda" obtained by The Rochester Voice reveals that Gonic residents may be pressured to rethink their opposition to the project.
The inclusion of NH Listens came the day after his cryptic statement on Sept. 6 regarding the upcoming meeting, when during the Mayor's Comments he read from a statement that said:

"I was pleased to see the residents of Gonic that came out on August 22nd to discuss the possible zoning changes to the old Gonic Brickyard. As a result of that energy shown by the residents, I've scheduled a community engagement session that will include both Councilors from Ward 3."
The Rochester Voice submitted a Right to Know request on Monday, asking for any documents and correspondence between NH Listens entities and city officials including Economic Development Chief Mike Scala, City Manager Blaine Cox, Public Information Manager Matt Wyatt and Callaghan.
What appears to be the city's initial outreach to NH Listens, a division of UNH's Carsey School of Public Policy that bills itself as a "civic engagement" facilitator, came on Aug. 26, four days after a planning board meeting where Gonic residents roundly rejected the rezoning to allow the apartment complex.
Shauna Sanders, the city's director of planning, emailed Stacey Purslow at UNH to tell her that the process of moving the apartment complex forward moved "a bit to quickly" and that the public "came out with pitch forks in hand" at the Aug. 22 meeting.
"There was an hour and a half of rowdy public input, and the Econ Dev Department that had brought the proposal forward ended up withdrawing the proposal," Saunders wrote Purslow.
Remarkably, Catholic Charities, the very organization that sought to erect the three-building complex at the Brickyard and was summarily rebuffed by Gonicians, is part of the Sept. 22 agenda, which calls on Catholic Charities and the city's planning department to make presentation and answer "clarifying questions about zoning and development" from attendees.
Rochester Listens, a subset of NH Listens, is listed as the "facilitating" entity charged with leading the meeting.
Mike Kirouac, who owns property adjacent to the Brickyard, said on Thursday he was disgusted that NH Listens had been brought in as a facilitator in what appears to a move by the city to keep the 180-apartment complex on the table.
"We don't need a third-party group coming here trying to break us down," Kirouac quipped. "We already told them what we don't want."
The complex as put forward was to primarily provide apartments to elderly and low-income individuals.
At the Aug 22 meeting Scala referenced the desired occupants would comprise workforce, age restricted and those seeking attainable housing.
Gonicians, however, feared many of the apartments would end up going to Section 8 housing that would lead to increased crime in their village.
City Councilor John Larochelle, who represents Ward 3, said on Friday he would be going to the Sept. 22 meeting to "listen to the residents."
He said only one constituent had personally come to him to complain about the proposal, but no one had come in support of it.
NH Listens is a national partner of Everyday Democracy, which in its "Who We Are" statements, says, "Everyday Democracy is a capacity building organization that provides technical assistance to individuals and groups working to build multiracial democracies within their local communities. We do this by providing training, coaching, and tools with a racial equity lens to support place-based engagement for community-led solutions."

Deputy Mayor and Ward 3 councilor Pete Lachapelle did not return a phone call the The Voice on Friday.