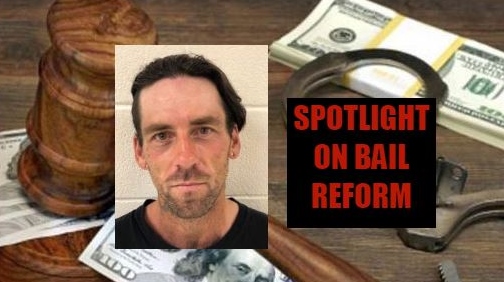 DOVER - The Rochester transient whose arrest in two burglaries in three days in July highlighted the failures of the state's recent bail reform legislation has been indicted in one of the break-ins.

Nicholas Closson, 38, whose last known address was on Jackson Street, was formally charged with one count of burglary and two counts of theft by unauthorized taking in connection with a burglary between July 26 and 27, according to court documents.

The burglary indictment alleges that Closson entered the Richardson Street property without permission for the purpose of a "crime of theft."

One theft charge, according to court documents, centers on Closson's "unauthorized control over checks, the property of (the victim), with a purpose to deprive him, thereof, the value of the checks exceeding $1,500."

The second theft indictment alleges Closson stole a tablet and checks from the same house, also with a worth exceeding $1,500.

Meanwhile, the state has requested a warrant for Closson's arrest after he was discharged from a residential program, which was a condition of his $2,000 cash bail being converted to personal recognizance through Strafford County Community Corrections, Strafford County Attorney Chelsea Lane said today.

Closson's PR bail began upon his intake into the residential program on Sept. 3. He left six days later in violation of his agreement with Community Corrections. As of now his whereabouts are unknown, Lane said.

Lane said the state had objected to Closson's bail being converted to PR.

Just four days prior to his arrest in the Richardson Street burglary, Closson was charged with possession of burglary tools (misdemeanor), loitering/prowling (violation) and attempted theft by unauthorized taking (misdemeanor) during a July 24 arrest at a May Street residence that was aided by an armed homeowner who arrived at the scene to find him attempting to burglarize his home and held him at bay until police arrived.

That case is being handled in Rochester District Court since the charges are all B misdemeanors or violations.

Shortly after Closson's second arrest, Rochester Police Capt. Todd Pinkham said if the first arrest had occurred prior to bail reform there would have been a much larger chance he would've been held on cash bail.

However, bail reform advocates like the bill's sponsor, State Sen. Dan Feltes, D-Concord, and its author, Albert "Buzz" Scherr, a UNH School of Law professor, want cash taken out of the equation, arguing that it is unfair to the poor and indigent.

In a statement sent The Rochester Voice last month Feltes said bail reform is designed to keep nondangerous people out of jail.

"Bipartisan bail reform protects public safety, protects individual liberty and economic opportunity, and protects property tax payers from footing the bill to jail nondangerous people pending their trial," he said. "If someone misses a hearing, that doesn't mean they are a danger to themselves or others, it means they missed a hearing."

A further request from The Rochester Voice for clarification on some of the apparent shortcomings of the bill was ignored by Feltes, who announced earlier this month that he would be challenging New Hampshire Gov. Chris Sununu next year.

Specifically, the Bail Reform legislation, SB 314, lays down the new parameters for cash bail to include anyone "charged as a felony, class A misdemeanor, or driving or operating while impaired, 3 or more times within the past 5 years" or deemed a danger to themselves or the public.

But many crimes like shoplifting and theft by unauthorized taking can be B misdemeanors that aren't even in the mix.

The result while awaiting trial is that some nonviolent offenders rack up a half dozen failures to appear with no consequence, Pinkham said, or reoffend and get another PR bail.

"I know this guy (Closson) didn't hurt anybody, but he's breaking into people's houses and stealing their stuff," Pinkham said last month. "Where do you value property, given the incident on the 24th? He's doing it again. What if we didn't catch him, and he pawned someone's $20,000 diamond ring?"

Pinkham said police have heard a lot of concerns from the community unhappy there is no accountability for such scofflaws.

Strafford County Attorney Tom Velardi said earlier this month the cumulative effect of arrestees getting back on the street on PR bail and reoffending and getting PR bail again was going down a dangerous path.

"People don't understand why (criminals) get out on PR and go back to court for another offense and get out on no bail again," Velardi said.

Gov. Chris Sununu signed a slightly revamped bill on June 25, saying, ""It is critical to close loopholes that could potentially allow dangerous suspects from causing harm in our communities while they await trial, and this bill is another step in the right direction."

But Velardi says more needs to be done to hold nonviolent offenders accountable when they break laws while out on bail or fail to appear for court dates multiple times.

"Someone's going to end up getting hurt, and it's unfortunate if this is what has to happen for things to change," Velardi said last month.

Velardi is also part of a group of stakeholders from law enforcement agencies, the ACLU and others charged with considering recommendations to further strengthen bail reform to protect the public. They will make those recommendations to the legislature in November 2020.