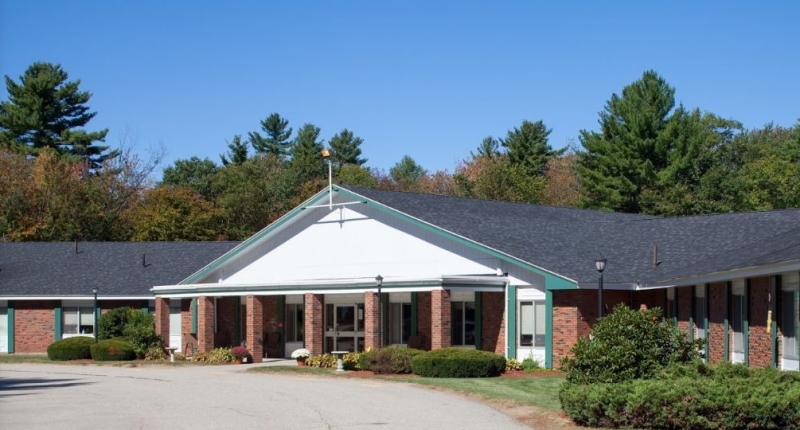 The Rochester Manor is one of hundreds of nursing homes across the state where frontline workers will be able to get an extra $300 a week for their sacrifice. (Courtesy photo)

As early as Wednesday, an estimated 25,000 workers in nursing homes and extended-care facilities will be able to go online to the state Department of Employment Security to receive an immediate additional $300 a week in pay going forward through the pandemic through the new state Long-term Care Stabilization Fund.

Sununu also announced at a news conference on Tuesday a partnership with ConvenientMD for immediate COVID-19 testing for all front-line nursing home workers in Hillsborough and Rockingham counties. Seventy percent of the total cases of the new coronavirus have been confirmed in those two counties.

There are approximately 6,600 workers at these health-care facilities, from janitors to food service providers to nurses and doctors who can take advantage of this testing at no cost.

Sununu also said he is working on a regional partnership with the governors of Vermont, Maine, and Massachusetts to begin discussions on how and when to move together to open up society, similar to other regional discussions going on across the country.
Sununu also rejected calls from an online petition asking him to open the state up by April 24 saying, "public health trumps everything."
And the governor also pushed back against a lawsuit filed against him by top Democrats in the legislature who believe he is usurping legislative power over the distribution of more than $1.25 billion in federal relief money by creating his new Governor's Office For Emergency Relief and Recovery, which met Monday and will meet today and Friday at 1 p.m. by phone.
Dr. Benjamin Chan, the state epidemiologist, went over the day's statistics, saying the four new deaths from COVID-19 were all elderly residents of nursing homes which had previously reported outbreaks of the novel coronavirus.
Three were at Hanover Hill Health Care in Manchester and the fourth was a resident at The Huntington at Nashua.

Regionally, Strafford County coronavirus cases rose by nine to 69, while locally, Dover is listed with 20-49 cases, Rochester, Somersworth and Barrington with 5-9 and Milton and Farmington at 1-4.

Chan said more testing of front-line health-care workers could help slow the spread of the virus and he welcomed the partnership with ConvenientMD.

Chan said the state is "far from a position of being able to contain the virus" though he is seeing signs that the number of cases is plateauing, that the hospitals are managing with the number of new admissions about equaling the number of discharges.
But he stressed people still need to stay at home as much as possible.
Chan reported that in all 27 residents have died from COVID-19 in New Hampshire.

In the past few days, the number of cases have been lower than Tuesday's 73, but Chan noted that about 30 of the confirmed cases were reported from entities out of state including Massachusetts, which tested New Hampshire residents and relayed that information.

Of the total 1,091 cases, about 15 percent of the New Hampshire COVID-19 patients have required hospitalization.

Chan noted the past weekend's air delivery of over 6.6 million pieces of personal protective equipment arranged by inventor Dean Kamen who fronted close to $5 million for the material is "critical" not only caring for people in the hospital but protecting health-care workers.

While overall numbers of cases have increased, Chan said there is evidence that social distancing efforts are working.

"The daily number of cases has started to plateau," Chan said.

He suggested people wear a cloth mask or face covering at the grocery store or when interacting in public and to avoid touching one's face with dirty hands while wearing the masks. Chan said the state still has "many, many weeks" to go.

Sununu said the $300 a week for the nursing home care providers is critical as the most vulnerable citizens to this virus, and the ones who have suffered a majority of the fatalities, are their patients who need them.

"We need those workers there," Sununu said. "These are critical facilities."

The governor also responded to questions about the lawsuit filed which seeks to disband his new office for emergency relief. He said the new office, which includes ranking Democrats, will be fully transparent and work much quicker than the legislature can act to put the resources where they are needed.

He gave the example of trying to buy PPE and noted it is "like the wild west," where people are sitting outside the factory doors with suitcases full of cash. Sununu said if he had to go to the legislature to get authorization for money like that "the deal is gone before I have got off the phone....that puts people's lives at risk," he said.

"We are in the middle of a worldwide pandemic when minutes matter," Sununu said. "To put the handcuffs on this office, doesn't make much sense."
The governor lauded the news that New Hampshire's airports will be getting $15.2 million through the federal CARES Act funding.
The money will be distributed to the following airports:
· Manchester-Boston Regional (Manchester) - $12,129,630


Members of the state's Congressional delegation announced the funding Tuesday.

U.S. Senator Jeanne Shaheen, D-N.H, a negotiator of the bipartisan Coronavirus Aid, Relief and Economic Security or CARES Act, argued that the continued operation of New Hampshire's airports is needed to ensure essential workers and supplies reach the state during the COVID-19 pandemic.
Sen. Maggie Hassan, D-N.H., and Representatives Annie Kuster, D-N.H. and Chris Pappas, D-N.H. together with Shaheen, announced the grants.

"Throughout this crisis, delivering desperately needed assistance to New Hampshire has been my top priority," said Shaheen. "These resources will provide urgent relief to help our airports weather this storm so they can continue to operate and provide Granite Staters with transportation options once this pandemic is behind us."

Sununu said: "That's terrific news," adding he had not yet heard it.

"There was a lot of funding in the original CARES Act but it was all for big airports," and it cut all of New Hampshire's airports out of the mix.
Sununu said some of the airports have been taking a big hit with the lack of travel and this comes as welcome news to protect the viability of the state's air services.