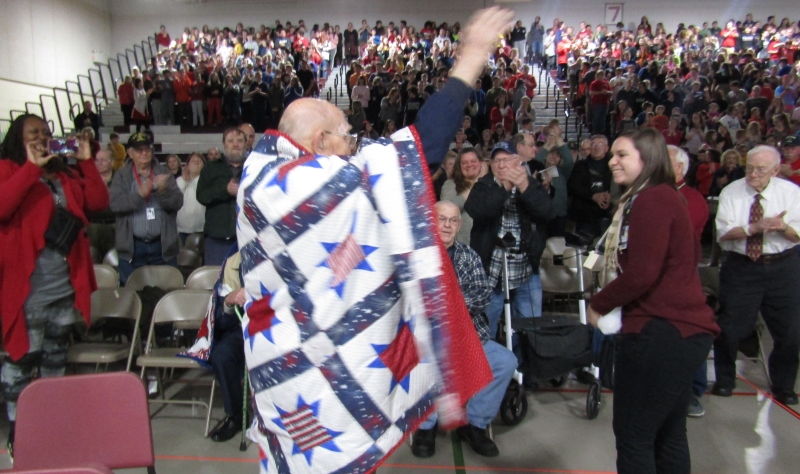 ROCHESTER - It was a veterans' lovefest at Rochester Middle School on Friday.

For the 10th year in a row, the Brock Street school put on a gala show that paid tribute to the nation's patriots who serve their country both at home and overseas in some of the most dangerous places on earth.

In a ceremony full of emotion, the highlight of the afternoon was the presentation of handmade quilts donated by a Rochester family to three World War II veterans, who visibly choked up as the quilts were wrapped around their shoulders.

James Feather, a Navy veteran, the last of the three to be honored, brought the house down as he stepped away from the podium to turn around and wave to the crowd as his eyes filled with both pride and joy.

Also presented with quilts were Army veteran Hilding Carlson and Edward St. Pierre of the Navy.

David Sellers, a Navy veteran of the Vietnam War, presented the quilts to the three men.

"For me, it's all about respect," said Sellers, who is president of the Rochester Veterans Council.
Peter Tiews, who served in the Army from 1969 to 2000, said he's been coming

to the Middle School salute to veterans for five years. He said it's important that young people are exposed to veterans and their stories of heroism and sacrifice.

"It means these kids can find out what we went through and understand what veterans have done," said Tiews.

The hourlong ceremony included the singing and playing of patriotic songs from the RMS chorus and band, including the band's rousing performance of "Boogie Woogie Bugle Boy."

A standing room only audience also got to see a talented performances by the Piscataqua Rangers Jr. Fife and Drum Corps and the Ancient Order of Hibernians bagpipers as well as a student-made movie that featured visits around the city to interview local veterans.