A dozen displaced but all safe after 3-alarm fire at Lafayette St. apartment house 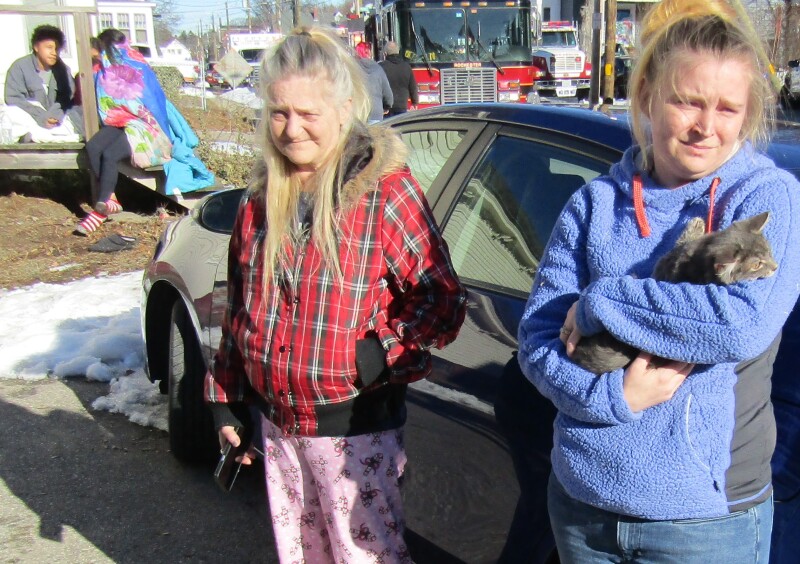 An emotional Jessica Danforth clings to her cat as her mom, Bailey Shelley Danforth, looks on. background, another family displaced huddles under blankets on a nearby stoop. (Rochester Voice photos)

ROCHESTER - A three-alarm fire on Friday displaced a dozen residents from a Lafayette Street apartment house that was left uninhabitable.

A "cooking fire" called in around 11:40 a.m. started in the first floor kitchen at 61 Lafayette Street, according to Rochester Fire Chief Mark Klose, who said due to the construction of the building it spread quickly onto the second floor and into the attic.

Within minutes a mammoth response from nine local communities featuring a complement of 64 personnel and 19 apparatus was on hand, he said.

Rochester Police sealed off all entry points onto Lafayette Street to clear the way for incoming ladder trucks, ambulances and other fire vehicles.

No firefighters or civilians were injured in the fire, Klose reported, adding that a dog and two cats had been rescued.

When firefighters arrived heavy fire conditions including flame and smoke were billowing from the building, but within a short time only plumes of smoke could be seen.

Firefighters aggressively attacked the blaze on all three floors, donning air tanks to navigate the thick smoke that poured forth.

Klose said the blaze fully demolished the first floor apartment and did damage to the other parts of the house as well. He said the structure was uninhabitable, but couldn't speculate on whether it could be rehabilitated.

He also credited Eversource and JCR Electrical crews who were nearby when the fire first erupted and helped to get folks out of harm's way.

The family who lived in the apartment where the fire began huddled in blankets on a nearby stoop as firefighters battled the blaze. Jay Guillermo, a family member who lives down the street, said everyone was OK.

Jessica Danforth, who lives on the second floor, said she wasn't at home at the time of the blaze, but her husband was.

"He called me and said, 'The house is on fire,'" Danforth said. She said they'd been living their for a year and a half and she was "devastated."

She said she didn't know where she'd be staying Friday night, adding they had relatives in the state, but they were a ways away.

Ann Britton, who lives next door, said her apartment house was never evacuated. She said she first learned of the blaze when someone came out of 61 Lafayette St and yelled fire. She said she was told it was a grease fire.