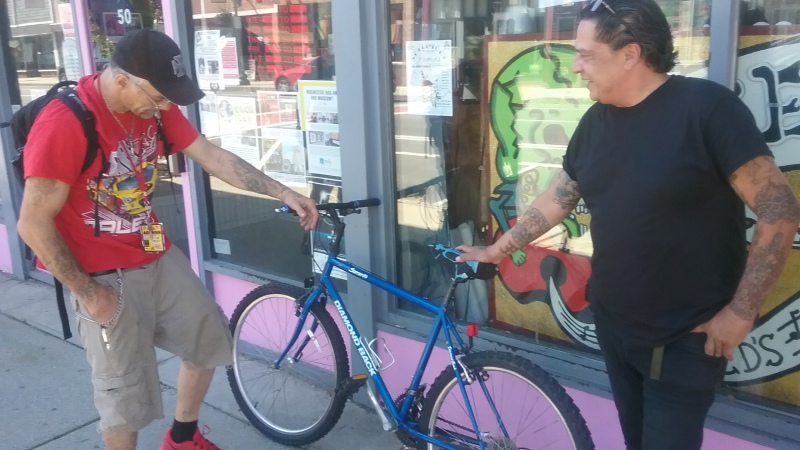 Mike, aka, 'Tuna,' shows off a bike he rebuilt himself as Todd Radict of Skele-tone Records looks on. (Rochester Voice photo)

ROCHESTER - Less than a month ago he was living in a tent in the woods with a $400 a day heroin habit, often shooting up 10 times in a single day.

Today, he's clean (off heroin), got a roof over his head and trying to start a business fixing bikes.

His name is Mike, but, "Folks on the street know me as Tuna," he says.

So how did this turnaround, this epiphany occur? Some innovative government program? Maybe a concerned nonprofit?

No. One man caring for another.

"I met him a long time ago," says Mike. "I'd come in to buy stereo equipment. He knew some friends that I knew, and we just became friends."

Radict said he knew Mike used heroin, but never became judgmental until he saw Mike relapse after being clean for several months.

"Mike was clean for a while and then started using again, and I told him 'I really like you when you're clean,' so what can I do to help," Radict said on Friday at his shop. "He said he had no transportation to get his methadone, so I started taking him every day."

As the two slowly bonded Radict said he noticed something else.

"When people would talk to him, try to tell him stuff, I noticed his head would go down," Radict added. "We pushed the people away who were giving him that low self-esteem, and his head went higher."

Radict knew Mike was living in the woods, so he bought him a tent.

"Finally we got to be close friends, and I let him move into my house," Radict added as he looked fondly at Mike, who nodded and smiled.

Radict said the move has been a win-win for both men. He drives Mike to get his daily dose of methadone at a Somersworth clinic every day, and Mike goes about his business working on bikes or electrical equipment. He also cleans around the house, wants to fix Radict's Harley Davidson motorcycle and helps out at Skele-Tones.

"Mike has done a total 180," Radict said. "And he's only been clean three weeks. A week after he moved into my home, I saw him smile. I said that's the first time I saw you smile. We've slowly become best friends. We take care of each other."

Mike was born in Norwich, N.Y., but moved to Rochester when he was very young and grew up here. He said he began smoking marijuana when he was young.

"I was a Dead-Head," he smiles. "I actually went on some of their tours."

Then in his late 20s he got in a bad motorcycle accident, shattering his L5 vertebrae, the lowest joint of the spine, as well as his femur and several ribs.

Unbelievable by today's standards, Mike was put on Oxycodone for more than a year during which time he had several operations while recovering.

"When they finally said they were done doing surgeries, they said I needed to go to physical therapy," he said. "Then while doing that they cut me off cold turkey."

He said the withdrawal from the oxys made him sicker than when he tried to quit heroin several times many years later.

Radict said Mike realizes it's only been three weeks, but he thinks his new roommate has a great shot at saying clean on his path of recovery.

"Now, sometimes when Mike has bad thoughts, he says to me, 'I don't' want to do that anymore. I don't want to go back,'" said Radict.

Mike admits he was on the wrong side of the law for years, mostly for drug use and petty theft to pay for his habit.

"When I was out there (using drugs) I was making ends meet, but was it on the legal side? No.," he says. "I was thinking about my habit and feeding myself food for the next few days.

"Now I realize you can get what you need, your money, and you can do it legally."

To do that he works around the shop at Skele-Tone Records, fixes electronics and rehabs and sells broken bikes.

"People give them to me, we buy them at yard sales and I fix them and sell them," Mike said, proudly displaying a 23-gear Diamond Back mountain bike he recently fixed. "I made the seat cover myself," he adds.

Radict said he was blessed to have been able to help Mike battle his heroin demons, and believes if more people could step forward to give those who want it a helping hand Rochester would be a better place to live.

"He's just three weeks clean," Radict said. "We should be patting him on the back and saying great. If more people step up, pony up, if we help these people one by one it would help the drug problem and theft."

Mike estimates there's maybe 200 drug addicts in Rochester who live on the street or in tents like he was just three or four weeks ago.

He also said there are an untold number of functioning adult drug addicts living in homes and apartments with their young children.

"They're living and working and taking care of their kids and then going and shooting up in their bedroom," he said.

He said the government can throw all the money they want at these people, but if they don't want to be helped, it's wasted money.

"Leave them alone," he said. "They have to hit rock bottom, they have to hit that bottom plateau where they've had enough. You can't force these people and say, 'We want you to get better right now.'

"Until you're ready, yourself, to get help, to use the help that they're offering, you're not going to help them," he added. "A lot of money they're spending is a waste because they don't want to be helped."

"There's hope out there, the situation I fell in doesn't come every day," Mike said looking over at Radict. "But when it does, you have to seize the moment. This is legit, he wants to help me, he's doing it."

Mike's success has spawned a wellspring of satisfaction for Radict.

"Some people don't want to change, but some do, and we need more volunteers to make this happen," he said.

"I did this 30 years ago with another person struggling with drugs, and that was successful, too, so I'm two for two," Radict said smiling. "If people get involved and are not negative, you can only have positiveness."

And if you need a bike or need one fixed, stop by Skele-Tones and ask for Mike or "Tuna ," he says.