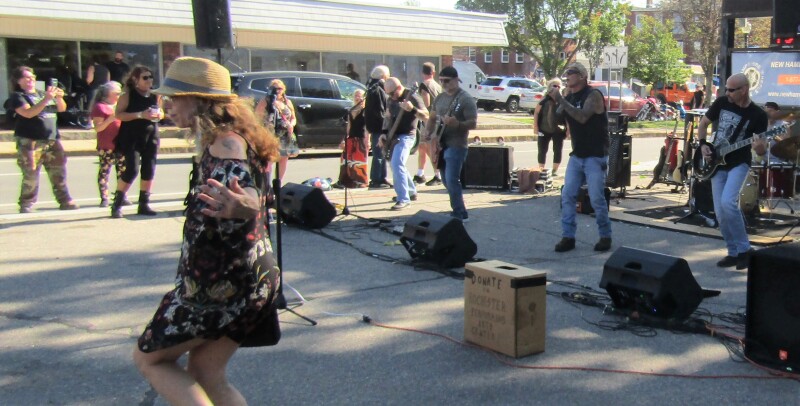 Daisy Cutter 6 playing in front of Hervey's Tire gets one lady dancing as others look on and take pictures and videos Sunday during Porchfest in Rochester. (Rocheter Voice photos)

ROCHESTER - It may have rained on the Patriots and Tom Brady's and Gronk's Bucs yesterday, but it didn't rain on Rochester's 4th Annual Porchfest.

While some forecasts called for possible rain showers in the afternoon, skies ended up clearing by late morning in time for the noon startups for a dozen or so bands scattered at venues throughout the downtown.

Food trucks and vendors were centered in the Union Street parking lot, which didn't see as large a crowd as last year, likely for two reasons: Porchfest was one of the few festivals allowed last year during the lockdown; and Sunday was the final day of the inaugural Granite State fair, which saw large crowds both weekends.

To add salt to the wound, the wapwapwap of charter helicopters giving rides at the fair regularly flew over the downtown on their final approach to the fairgrounds at the end of Lafayette Street.

But even with the competition there was plenty of buzz to be heard at Porchfest where some 30 blands played 90-minute sets at more than a dozen venues around the downtown from noon-5 p.m.

One of the most popular spots was Hervey's Tire where Daisy Cutter 6 featuring Mike Frampton put on an electric show that had about 100 folks enjoying the newly formed band.

Following Daisy Cutter 6 at Hervey's was Badtude, which also had a large contingent of fans show up.

Enjoying Marcy Drive in front of the Hartigan Block Bee mural on Union Street were Shirley Martel of Sanford, Maine, and Robert Mitchell of Springvale, Maine, who both brought lawn chairs to watch the shows in comfort.

"We don't always come over this way, but when we heard about Porchfest we said we have got to see this," said Martel.