A new name but still all in the family: New Bridge Road Marina set to dive right in 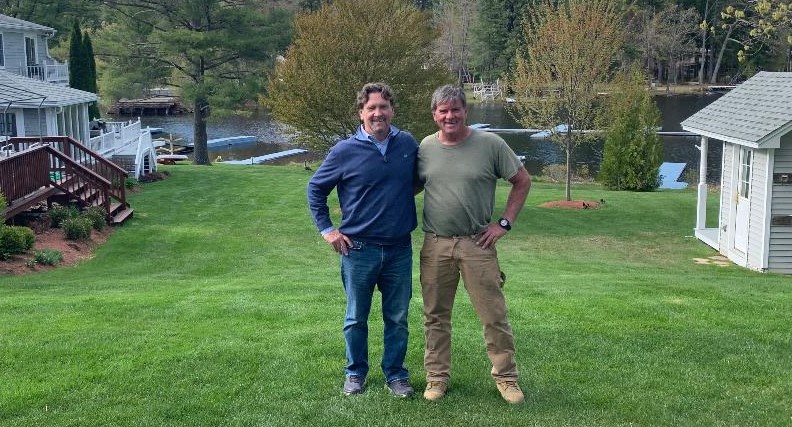 LEBANON, Maine - Mark Mahoney has spent his whole life around boats and the water. He and his siblings grew up on the Danvers River in Massachusetts and spent summers at the nearby Beverly Harbor Marina. As a young man he worked for his dad who owned a nearby yacht sales business and later began his own career in the food and beverage industry.

So when a friend mentioned to him that Everetts Cove Marina in Lebanon was for sale he knew right away he wanted it.

"My first time on Milton Three Ponds was last fall," he said on Tuesday. "A good friend invited me to meet a client with a fantastic antique boat collection and take a ride on a recently restored Century Coronado Hardtop. When we drove by Everetts' Cove Marina, he asked if I wanted to buy a marina, and my immediate response was 'Yes!,' I took a picture of the marina and sent it to my brother, Bill, who has been a marine engine technician for more than 30 years in the lakes region out of his shop in Gilmanton. I asked if he wanted to buy the marina with me, and he told me he had clients over that way and that it was a great spot."

It wasn't long before the two brothers met with Jeff and Susan Everett, who have owned the marina for 22 years. They quickly came to an agreement and recently completed the sale.

The two brothers have renamed the business New Bridge Marina, with Bill as general manager and Mark as operating partner.

Mark Mahoney's wife, Stephanie, a graduate of UNH with a degree in hospitality management, has been a restaurateur and café owner for the past 30 years, currently running the The Blue Canoe Café in Marblehead, Mass., He said she'll be running the ice cream shop at the New Bridge Road Marine, which has been dubbed The Blue Canoe. The eatery will be adorned with a restored Old Town canoe on its roof, Mahoney said.

The longtime ice cream shop, a favorite among Lebanon and Milton residents, will also have an expanded menu, with sandwiches available for lunch and snacks, he said.

On the marina side, the two brothers have been working on a master plan for their land with the town of Lebanon and neighbors to accommodate dedicated parking for marina members, ice cream and rental customers and to allow the launch ramp customers a dedicated space off the streets and away from the neighbors' properties. They envision up to 50 spaces for trucks and trailers to park on marina property.

"And we're looking at adding a mechanic shop with in-door storage and a wash down station for boats/trailers to mitigate spreading invasive species," Mark Mahoney added.

Due to the demand for boat slips, he said they'll be testing a "concierge" service for boats where a customer would call 24 hours before they need their boat.

"We would launch it and retrieve it when they're done and put the boat/trailer in a secured lot," Mahoney said.

He said they had also added three new pontoon boats to the fleet and will utilize their Gilmanton satellite yard for New Hampshire lake deliveries.

He said they would no longer rent personal water craft, but would be renting kayaks and canoes.

Just like with the Everetts, New Bridge Marina will truly be a family affair, with his two sons, Spencer and Logan, also helping out.

Their full-time jobs are running Atomic Coffee Roasters which has production facilities in Salem, Danvers and Peabody and is owned by Mark and his brothers, John and Andrew. Atomic coffee and cold brew products will be featured at the Blue Canoe this summer, Mark Mahoney said.

The New Bridge Road Marina will open for marina members with slip availability on Friday. The Blue Canoe will open for Memorial Day weekend.