A Rochester treasure gets his trike - and his groove - back 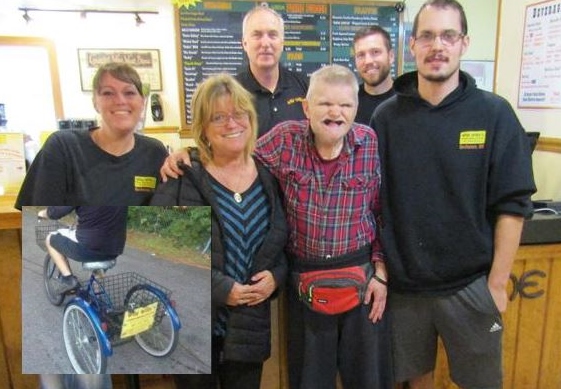 ROCHESTER - When someone stole Joe Hooper's prized possession, a three-wheeled bicycle he uses every day to run errands like getting scratch tickets for the waitresses at Wild Willy's Burgers, the beloved 72-year-old Gonic man was totally despondent.

Hooper, whose daily routine includes hanging out mornings at Wild Willy's where his adoptive sister, Irene Lancaster, works as a waitress, couldn't believe anyone could do such a despicable thing, Lancaster said on Thursday. She said Hooper was distraught over the bike's theft.

"He'd sit at the counter, put his hands on his head and say, 'I can't believe it,'" she said on Wednesday.

Well, Thanksgiving came a week early this year for Hooper, who's thankful to have his means of transportation back. His bike was found under a tarp near the Franklin Street cemetery on Tuesday, three days after it was stolen from behind Wild Willy's and after a frenetic Facebook campaign that tracked its movements around the Lilac City.

Three Facebook posts detailing the bike's theft and recovery racked up 5,200 shares, which likely helped the many Good Samaritans looking for it.

For those who don't know, the tricycling Hooper is considered something of a Rochester legend, referred to by many as the "Mayor of Rochester," Lancaster said.

A longtime friend of Hooper's adoptive parents, Doug and Jeannie Brochu of Gonic, on Tuesday learned through a comment string, that the bike had been spotted near the Franklin Street cemetery. That sent Reggie Barrett out into the pouring rain to look for it. He came back soaked, but he had the bike, Lancaster said.

The quick recovery was a family affair as Lancaster's sister, Jeanine Carter, who lives in Farmington, did all the Facebook posting.

Asked on Thursday what his first thoughts were when he saw his bike was stolen, Hooper said flatly, "I had to walk to get the scratch tickets."

With all the drama behind him after the three-day ordeal, Hooper was back to his regular routine on Thursday, cheerfully filling the napkin holders and ketchup containers at Wild Willy's where he enjoys a complimentary lunch for his hard work.

It's a daily routine he's been doing for the last 14 years, ever since Lancaster began working at Wild Willy's.

"He comes with me every day," she said. "Then he goes home with my mom around noon and watches his game shows."

Now that the bike is safely put up for the winter, he still has to walk to get the lottery tickets, but that's done cheerfully, too.

Joe Hooper is just that kind of guy.

"I can't imagine life without him," Lancaster said. "There's a lot to be thankful for."