A sparkling day on the Cocheco: Benefit raises $$$, expectations for city's riverfront 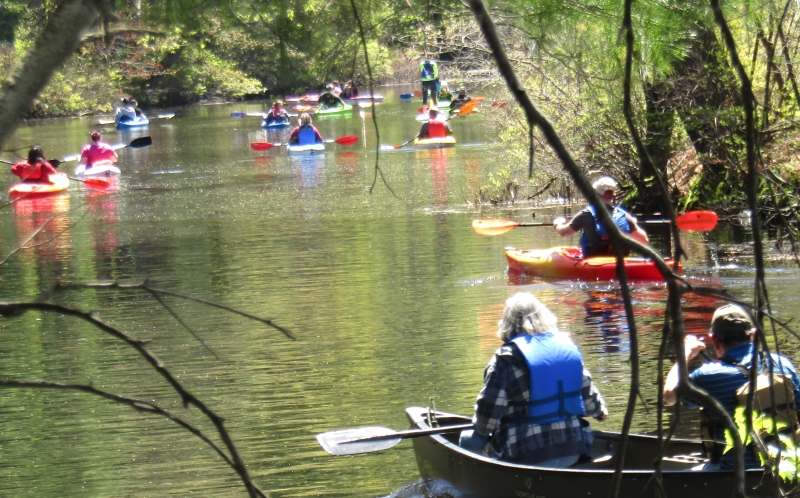 Kayakers and canoeists paddle a tranquil stretch of the Cocheco River during Saturday's 'Lunch and Launch' fund-raiser. (Rochester Voice photos)

ROCHESTER - A group of about 35 kayakers, canoeists and one paddleboarder enjoyed a shimmering day on the Cocheco River on Saturday as part of a fund-raiser to build a handicapped accessible launch site so that everyone can enjoy this jewel of the Lilac City.

The "Lunch and Launch" fund-raiser began around 11 a.m. at the foot of Hillsdale Drive where the proposed launch site would be built.

Helping the canoeists and kayakers with parking and getting their boats to the water was Riverwalk Committee Chair Stacey Marchionni, who said she was thrilled with the weather, which was perfect for a river excursion.

"It's really exciting to see people out here enjoying the river," she said as boaters of all ages bantered and joked while putting on bug spray and sunblock. "It's such a beautiful community thing, and to see kids come out and enjoy the water and fish and go kayaking or canoeing, it's just great."

Marchionni said the ramp is expected to be built using a Community Development Block Grant that has preliminary approval by the city. If all goes as planned she said it will be installed sometime late this summer.

Another project the Riverwalk Committee hopes to complete soon is building a ramp that allows easy access from the walking trail at the end of Hillsdale Road to the trails of Hanson Pines and the Dewey Street footbridge as well as the kiosk near the swimming pool adjacent to Spaulding High.

She said the committee had first wanted to rebuild the Heath Brook footbridge which burned in a fire years ago, but the cost at $250,000 was prohibitive, but the proposed ramp was a good alternative.

"The ramp will allow good access to the rail trail and connect to the Pines," she said. She said while ungroomed, the trails are very gentle for novice hikers and even moms and dads with strollers.

One of the kayakers, Heather Gauthier of Rochester, said she was looking forward to an hour or so on the water with her son, Ethan, 6.

"I'll put my kayak in anywhere I find mellow water like this," she said.

After a quiet paddle downriver eventgoers were treated to a picnic lunch near the Dewey Street footbridge compliments of Moe's Italian Sandwiches.

The complimentary lunch was a thank you to participants who made a $20 donation to the Riverwalk Committee, who will use the money to fund other improvements along the river like an anticipate kayak pullout just north of North Main Street near the Victory Club.

Ray Felts, who lives not far from there on River Street, said he loves the Cocheco.

"I get to wake up every morning and look out on it," said Felts, adding, "And I keep my frontage tidy so it looks nice."

Eventgoers, including Felts, also got an extra surprise when they showed up for the fund-raiser: a free three-month subscription to The Rochester Voice.