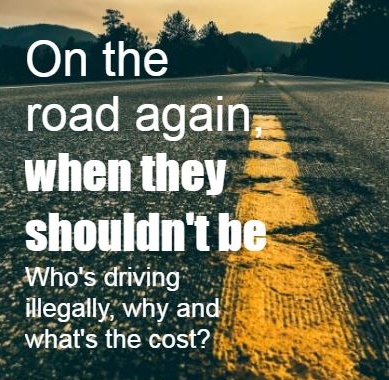 Editor's note: The Rochester Voice today continues its occasional series on the number of arrests for those driving without a valid license, the cost to the community, the consequences of such arrests and the possible impact on their insurance rates and ours.

ROCHESTER - In the last seven daily arrest logs released by Rochester Police, seven of the 22 arrested - about a third - were for driving illegally with either suspended or revoked license, including two who were driving while classified as habitual offenders.

In one of those recent arrests an Enfield woman turned herself into Rochester Police last week on charges including conduct after an accident, open container, suspension of vehicle registration, driving after suspension and criminal mischief. Another was arrested for allegedly driving a stolen car while classified as a habitual offender.

Now consider this. Of the 32 folks indicted by the most recent Strafford County grand jury, three - or about 10 percent - were for operating as habitual offenders, a felony that can draw up to five years behind state prison walls.

To try to reduce the recidivism rate among - if you will - "habitual" habitual offenders, Velardi said Strafford County maintains a habitual offender program, where court-appointed monitors mentor and guide offenders through a process that seeks to reduce their reoffending so they can get their licenses back and become law-abiding motorists once again.

It's sort of like a drug court, but geared to habitual offenders instead of those dealing with addictions, Velardi said.

Habitual offender listing is determined by rules set forth by the DMV that ascribes certain point values for traffic violations that run the gamut from speeding and running a stop sign to more serious offenses like leaving the scene of an accident, reckless conduct or DWI. Once a motorist is classified they usually lose their license for several years, try to stay clean and then apply with the DMV for reinstatement.

But serious jail time can result if they drive while classified as habitual offenders.

Velardi said Strafford County grand juries indict about 25 a year but few ever get to trial unless one of the underlying charges is contested; rather, they agree to a plea deal.

"If the indictment results from a more minor charge like speeding they might get a few days or weeks of jail time," Velardi said, "but if they have a bunch of DWIs or more serious offenses, they could get the full five years in state prison."

Velardi said the overwhelming percentage of habitual offenders are not career or hardened criminal and shouldn't be mistakenly thought of as such.