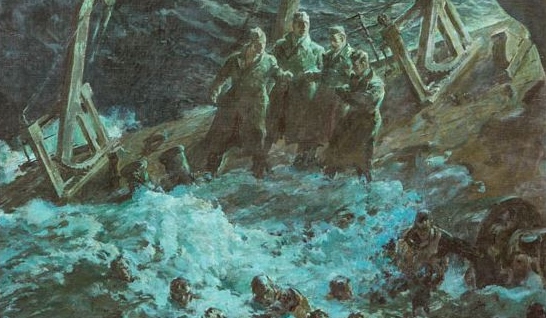 The final moments as the Four Chaplain give up their life vests so others might survive. (Courtesy image)

The day marks the 76th anniversary of the sinking of the Army troop ship Dorchester by a German submarine. The incident became famous for the sacrifice of four Army chaplains, who gave up their life jackets, linked arms and went down with the ship.

The moment of truth had come for the four chaplains when it was struck by a torpedo fired by a German U-boat off the coast of Greenland on the night of Feb. 3, 1943.

The four chaplains - Father John P. Washington, a Catholic, Rabbi Alexander D. Goode, a Jew, the Rev. George L. Fox, a Methodist, and the Rev. Clark V. Pohling, Dutch Reformed - were men of different religions, but one faith, and that faith would now be put to the ultimate test.

Most of the 900 soldiers were sleeping at the time of the attack, and many arrived topside shivering in just their underwear. Time was running out and the scramble was on for life jackets, and there weren't enough to go around. Only 230 men would survive the attack, and 40 of them later told a U.S. Army inquiry they saw the four chaplains peel off their life jackets and give them to soldiers. Then they linked arms, alternately singing hymns and offering prayers as frigid waters of the Atlantic Ocean swallowed the Dorchester.

"It's important that we remember them," said Paul Fried, the son-in-law of Rabbi Goode. "During those days, Protestants and Catholics didn't worship together, let alone with a Jew. But the lesson seems to be that if they could die together, than we can live together."

February 3, 2019, marks the 76th anniversary of what has come to be known as the Immortal Four Chaplains, one of the most storied moments of World War II.

The story that needs to be kept alive, the Dorchester sank in 18 minutes, and the last thing the survivors saw were these men praying to one God. The courage, bravery and sacrifice of the four gentlemen of God should always be a reminder that out of despair came ultimate good. Coming just 14 months after the attack on Pearl Harbor, the incident came to symbolize the American ideal of religious freedom and tolerance and the ecumenical spirit.

The story became a particularly potent symbol of valor in the face of Nazi terror and there was a burst of remembrances in the years immediately following the war. The four chaplains were awarded the Purple Heart and Distinguished Service Cross in 1944, and memorialized on a U.S. postage stamp in 1948.

In 1951, the Chapel of the Four Chaplains opened in Philadelphia; Congress awarded the Four Chaplains Medal in 1960. As the years go by and the ranks of the so-called Greatest Generation thin, it gets harder to keep the story alive. The story is really poignant, like the scripture says, 'there is no greater love than if a man lay down his life for another.'"

The American Legion is located at 94 Eastern Ave. Rochester.