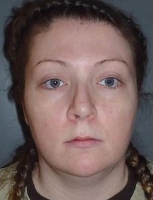 CONCORD - The woman who pulled what proved to be a fatal dose of heroin from her bra "to calm down" a Rochester teen distraught over a broken date was sentenced on Tuesday to five years in federal prison in connection with her death.

Leslie Aberle, 33, of Salisbury, Mass., had earlier pleaded guilty to conspiring to distribute and to possess with the intent to distribute heroin and fentanyl in connection with the death of Evangelique "Eve" Tarmey, a 17-year-old senior at Spaulding High.

Aberle's sentencing brings to an end one of the most sorrowful sagas of heroin addiction and abuse Rochester has seen in recent years.

Mark Ross, who had lived at the Riviera Motel and was the boyfriend of Tarmey's mom, Jazzmyn Rood, was sentenced in October to 20 years to life for distributing a controlled drug to a person under the age of 21, death resulting. Rood was sentenced in December to two years in federal prison for lying during the initial police investigation.
The initial affidavit filed by police less than a month after Tarmey's death tells a tragic tale of how innocence and addiction interacted to produce this horrific event that cut short the life of a beautiful young girl who worked at IHOP, loved to shop and was popular among classmates.

When police arrived at Room 117 of the Riviera Motel around 5 a.m. on Oct. 17, 2015, they saw a man performing CPR on Eve Tarmey, but that man, Ross, later told police that he'd found Tarmey dead, slumped over the bed she shared with her mom and Ross, around 3:30 a.m., according to an affidavit filed by Rochester Police.

According to the affidavit, Ross immediately began removing the "rigs" - needles, spoons and other heroin paraphernalia - from the room and disposed of them in a trash receptacle in a common outside area of the motel.

It wasn't until perhaps an hour and a half later, Ross admits in the affidavit, that he was able to wake up his girlfriend Rood, who is Tarmey's mom, and they finally called 911.

The image of Ross performing CPR on a dead Tarmey is just one of many gruesome revelations gleaned from the affidavit, which also sheds light on the final hours of Tarmey's short life and how the suspects likely changed their stories as a police investigation ran its course.

In their initial statements that fateful day, Ross told police he paid Aberle to drive him and Tarmey to Methuen, Mass., so she could meet with a boyfriend. When the boyfriend didn't show they returned home to the Riviera Motel. Later he awoke around 4 a.m., found Tarmey in the shower and believed she had overdosed from snorting heroin, the affidavit states. He said he found several straws on her as he administered CPR.

Rood's initial statements were all compatible with Ross'.

Four days later on Oct. 21, however, Ross met with a detective at the Rochester Police Department and added to his initial statement that he also went to Methuen to get heroin from a dealer, but that Tarmey wasn't aware of that, according to the affidavit.

When they got back to the motel, he said Tarmey was hysterical about not meeting up with her boyfriend, so Aberle broke off a piece of heroin she'd been carrying in her bra and told him to give it to Tarmey "to calm her down." According to the affidavit, Ross placed it on the table and told Tarmey "to do what she normally does." He said Tarmey crushed it and snorted it with a straw.

Ross then said he awoke around 3:30 a.m., found Tarmey slumped over the bed she shared with Ross and her mom, and knew immediately she was dead, according to the affidavit.

The next day, Oct. 22, police got a search warrant and rummaged through the trash bin where Ross said he had dumped the heroin paraphernalia. Police found several bags containing needles, including a white plastic "Market Basket" bag identified by Ross.

According to the affidavit, before he finally called 911 on Oct. 17, he called his Massachusetts dealer and threatened to kill him if he sold "bad shit" to his daughter.

Ross was asked if an hour and a half sounded accurate between the time he found Tarmey dead and he called 911.

"Probably, I don't know," he said, according to the affidavit.

Then on Oct. 23 a Rochester Police detective spoke again with Rood, who said she knew Ross was going to pick up heroin when he went to Massachusetts, but the plan was for her daughter to stay with the boyfriend and not return to Rochester, according to the affidavit.

Rood added that when they got back to the Riviera Motel everyone initially got injected with heroin except for Tarmey, who was still distraught about not meeting up with her date. According to the affidavit, Ross told her he would "calm (Tarmey) down" and "told her to go into the bathroom."

She further stated she didn't see her daughter take heroin, but suspected she was given some.

According to the affidavit, Rood said Ross didn't tell her he'd given Tarmey heroin until after police had left following their initial interview the day she died.

Aberle will remain on supervised release for three years after she serves her prison sentence.