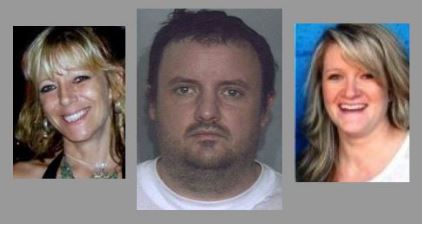 DOVER - The man accused of fatally stabbing two women inside a Farmington home in January told an acquaintance shortly before their deaths he thought one of them was a paid police informant, according to testimony given at a bail hearing for the suspect on Tuesday in Strafford County Superior Court.

Timothy Verrill, 35, of Dover, faces first degree murder charges in the Jan. 27 killing of Christine Sullivan, 48, who was the girlfriend of the home's owner, Dean Smoronk; and Jenna Pellegrini, 32, of Barrington, whom Verrill believed to be the informant.

State Police Sgt. Brian Strong testified that he first became involved in the case after Smoronk, 55, called Farmington police around 2:30 a.m. on Jan. 29 to say he was concerned about Sullivan's well-being after he found her missing upon his return from Cape Coral, Fla., where he has rental property.
Strong investigated Smoronk's 979 Meaderboro Road home later that morning and found damage to the kitchen ceiling, a large pool of blood nearby and a shovel with blood on it.

Sullivan and Pellegrini's bodies were found outside under a tarp.

Strong said Sullivan had a fractured skull and was stabbed in the neck and lungs; and Pellegrini had been stabbed in the neck, torso and back 43 times.
Not only did the grisly details of the two women's horrific deaths come to light on Tuesday, but also what the state may allege was the motive and the sequence of events that may have occurred in the victims' final hours.

According to testimony from Strong, Pellegrini needed a place to stay and texted Sullivan around 2:30 p.m. on Jan. 25. Sullivan agreed to let her stay at her and Smoronk's home.

Strong said Verrill went to Smoronk's house allegedly to get drugs the next day around 11 p.m., and that a friend of Verrill's told police that when he got to the friend's Farmington home early Jan. 27, Verrill said he thought Pellegrini was an informant.
Smoronk told investigators Sullivan contacted him that Verrill had returned to the house about 2 a.m. Friday, with phone records showing Smoronk and Sullivan were on the phone around that time.

A video recording device installed at the house showed images of Verrill in a flannel shirt and hat with a mesh back. Another camera shows images of Sullivan at 3:34 a.m.
Another video image of Pellegrini was recorded at 6:38 a.m., testimony noted.
An image also shows Verrill leaving the house nine minutes later holding his shoes, Strong said.

Strong said that when Verrill returned to his friend's home later Friday morning, he wasn't wearing either the flannel shirt or hat. Verrill allegedly asked his friend for a pair of pants to change into and had three to four shots of Jameson Irish whiskey.
Receipts and video surveillance shows Verrill going to Lowe's and Walmart in Rochester later in the day to buy salt and ammonia cleaner, evidence of which was found at the scene, Strong said.

Verrill was arrested in Lawrence, Mass., on Feb. 6 while seeking treatment at a medical facility. He is currently being held without bail at Merrimack County Jail.

Smoronk, meanwhile, was taken into custody on June 11 after a traffic stop on Interstate 95 in Virginia yielded a huge cache of drugs. The car was stopped while speeding through a work zone, according to Virginia State Police.

He is being held on $10,000 bond at Pamunkey Regional Jail in Hanover, Va.

The bail hearing will continue next month.