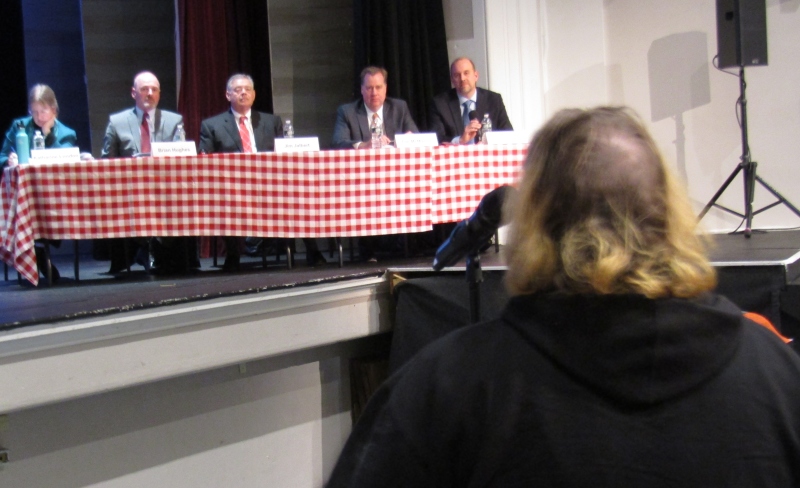 ROCHESTER - Leaders of Frisbie Memorial Hospital's Board of Directors and HCA Healthcare officials laid out a bold vision on Monday night as to how they plan to bring Rochester's financially strapped hospital back from the brink of insolvency to that of a leading local healthcare provider, with a resurgence in specialty care, an expanded behavioral health footprint and improved patient outcomes and satisfaction.

The public hearing at Spaulding High was hosted by the state's Charitable Trusts Unit, which oversees acquisitions of nonprofit entities like Frisbie by for-profit health care providers like HCA, a nationwide health care entity that owns 179 hospitals across the country.

After two years of hemorrhaging losses due to government-mandated medical billing requirements, Frisbie's dwindling endowment prompted its Board of Directors to go hunting for a partner who could bring added stability to keep the hospital afloat.

"We'd actually been talking about if for some time, but after losing so much in those two years, we knew we had to do something quick," said Frisbie Board Vice Chair Jim Jalbert. "It was a 'perfect storm' of dipping revenues."

Jalbert added with the implementation of a balky billing system that ended up not working, bills were going out late, revenues weren't coming in an necessary investments weren't being made.

Board Chair Brian Hughes said the board looked for a partner because "we wanted the excellent care folks had received at Frisbie to continue, and this (partnership with HCA) will continue and enhance those services that Frisbie provided."

If the acquisition is approved by the Charitable Trusts Unit and the courts, HCA has promised to provide a Foundation funded by some $20 million that will be controlled by a board of local citizens who will oversee contributions to efforts that benefit the people of Rochester.

Much of that is expected to be in the form of funding of local nonprofits that help the underserved in the area of addiction and mental health.

Tim McManus, the Capital Division President of HCA, of which Frisbie would be a part, said he's already been in contact with local providers including Avis Goodwin and Community Partners.

While the exact amount of the foundation is dependent on potential receivables and obligations that may arise during the acquisition transaction as well as unforeseen liabilities that may arise in the first five years, it is expected to be substantial, board members and McManus noted.

Rochester residents who spoke at the public hearing included Peter Smith, who asked specifically how the new Frisbie would compete with the likes of Wentworth Douglass Hospital of Dover, which recently partnered with Massachusetts General Hospital of Boston.

McManus explained that HCA planned to expand care in specialty areas like cardio health by bringing in specialists to treat residents so they could get quality care at Frisbie. He said data shows that more than 3,600 potential patients of Frisbie had traveled out of town for care recently, and it was their intention to stop that migration.

"We want to recruit these specialists so folks that live in Rochester can get their care close to home," he said.

McManus also explained that they planned certain improvements to the hospital in the short term including a new MRI imaging machine and a separate behavioral health unit within the Emergency Department.

Another speaker asked if the payscale with HCA would be above what Frisbie's is, adding she knew it to be lower than others in the area.

McManus answered that HCA would look at all factors including area cost of living and competitive industry standards in determining paygrade. He also added that while all employees would be terminated from Frisbie if the sale goes through, virtually all would be hired back at equal if not better paygrades and better benefits. And none would lose seniority in the transition, he noted.