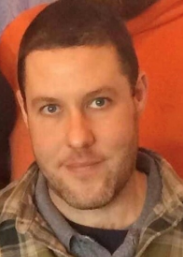 Adam Vincent Baldwin died in the early morning hours of January 10, 2022. He was 40 years old.

He was born in Putnam, Conn., on March 25, 1981. The youngest son of Lawrence and Patricia Baldwin.

He was a 1999 Graduate of Spaulding High School in Rochester, N.H. He went on to graduate from UTI in Phoenix, Ariz., with a major in auto mechanics. Following this he went to Porsche mechanic school in Atlanta, Ga.

He worked for many years as a mechanic and had recently transitioned into an Electrician Apprenticeship program.

Adam enjoyed adventures, he traveled across Europe, he loved the outdoors and enjoyed many camping trips with his family.

Adam was a talented craftsman, his work was meticulous.

Adam was a quiet, gentle soul who loved his family. He was his mother's primary caregiver until her death in December of 2021.

Adam will be dearly missed by his family.

He is survived by his siblings, Marsha Medeiros (Michael) of Maine, Sam Manning of California, Lee Baldwin (Jess) of Montana, Justine Baldwin (Dave) of Florida and Jacqueline Baldwin.

His great nieces and nephew: Paxton and Knox Laliberty and Lennox Springer.

His Brother in Law: Stephen Sherer

His Uncles: Edward and Richard Gervais of California .

He was predeceased by his parents Lawrence and Patricia Baldwin. And his Grandparents, Raymond and Gertrude Gervais, and Olin and Nora Baldwin.