After acrimonious court battle, finally a meeting of the minds at SOS 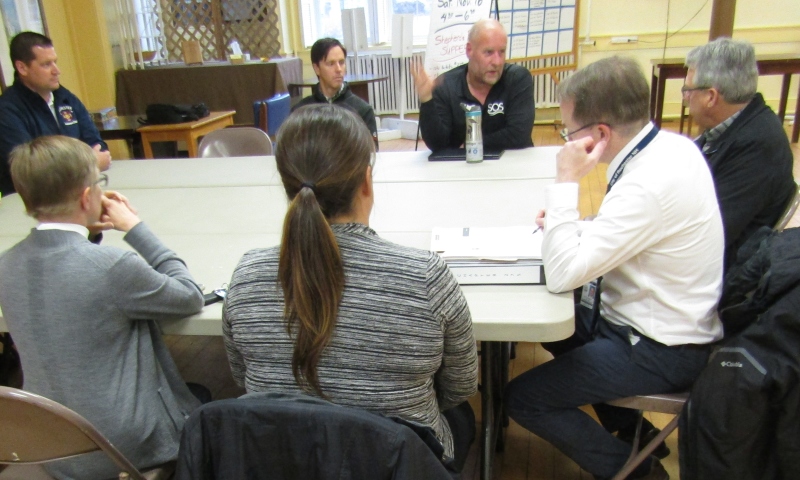 ROCHESTER - Tuesday's cordial sit-down between city officials and SOS Recovery seemed to turn the page on what had been more than a yearlong court squabble over the city's demand for a minor site plan review of the downtown addiction counseling nonprofit.

The meeting, which was held in an SOS' classroom inside First Congregational Church, was the first face-to-face meeting between the Minor Site Committee, an offshoot of the city's Technical Review Group, and SOS Director John Burns following the city's order for it to close in September 2018.

Following the closure order, SOS filed an injunction that allowed it to stay open, but the court battle dragged on with both Rochester and SOS filing dueling lawsuits in Strafford County Superior Court.

On Tuesday the discussion began precisely where it did in the summer of 2018 when a neighborhood petition with some 60 signees attested that drug activity had increased.

It also claimed that SOS staff and members of the First United Congregational Church where their offices are located had encouraged drug users from outside Rochester to come and live at the church.

Soon after petitioners presented their claims, the City Council determined they were unfounded, but shortly thereafter, code enforcement and zoning officials from the city showed up unannounced at SOS to inspect their operation, which led to the demand for a minor site plan review.

Tim Fontneau, who also serves on the city's Planning Board, began Tuesday's discussion by recounting the petition, which claimed drug users who frequented SOS and the church were throwing spent needles over fences and into residents' yards. Fontneau said there were similar concerns that arose from drug usage in and around the Rochester Public Library.

Burn explained that the increase in activity around the church and library in the summer of 2018 was a direct result of the city's public property tenting ban, which was approved in March of that year.

"Many were part of the tenting community, the homeless, who came to the downtown from the Pines," he said.

Burns said SOS also saw a bump in members and activity after the city set up a warming shelter at the Community Center and later the Armory on Brock Street in January of 2018.

Fontneau said it appeared calls for police and drug activity in and around the church and library had decreased this summer over last, a fact that both Burns and Rochester Deputy Chief Gary Boudreau generally agreed to.

"That hypersensitivity in 2018, itself, led to more calls, some of them deliberately to justify the petition's outrageous claims," Burns added.

Some of the petition's claims included that illegal drug activity was rampant in the neighborhood and that the homeless and drug using community were using the church as sanctuary. It also claimed that SOS staff and members of the First United Congregational Church had encouraged drug users from outside Rochester to come and live at the church, something that was never proved to be true.

"We are a peer-based support group," he said.

Much of the meeting comprised Fontneau asking the questions that are on the site plan review application.

In answering them Burns noted that they usually average 20-30 walk-ins a day and that the numbers drop in the spring and balloon in the summer. He also noted they recently had seen a spike of 15-20 new entrants to the program. He also said there are usually two to three employees on site.

SOS agreed to submit the Minor Site Plan Review Application and to Tuesday's inspection "without prejudice," a legal term that stipulates nothing in its writing or the meeting can be used as evidence against SOS and First Congregational Church in any court proceeding or used as precedent.

The city's Minor Site Committee is a subcommittee of the Rochester Planning Board, and will now make a recommendation as to whether to accept the application as presented.

SOS Recovery also has centers in Hampton and downtown Dover. They are affiliated with Goodwin Health of Somersworth.