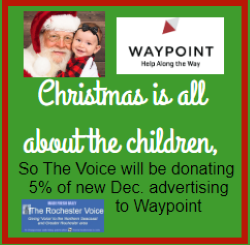 After all the yelling and screaming, planner says this is how it's supposed to work 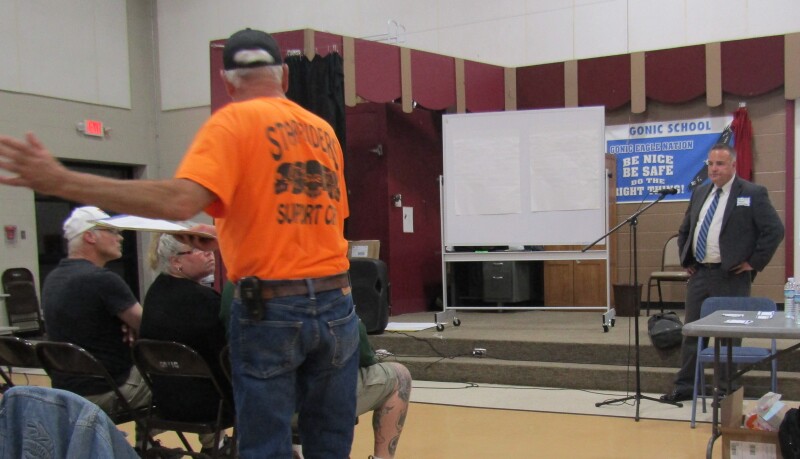 MAYORAL SHOWDOWN: Brickyard abutter Mike Kirouac,left, tells Mayor Paul Callaghan that spot zoning - by law - should only be done for the 'benefit' of the city, not the 'detriment.' (Rochester Voice photos)

GONIC - Gonicians knew it was going to be a set-up, and a set-up it was.
Just like at the planning board meeting last month, there was unanimous agreement from the 60 or so residents who showed up at the Gonic School on Thursday that they do not want a 150-apartment complex four tenths of a mile from downtown Gonic.
But after more than two hours of being roasted by Gonicians over the city's back-door handling of the proposed workforce (low-income) housing project and its tone-deaf attitude regarding legitimate neighborhood concerns, city Planning and Development Director Shanna Saunders tried desperately to
put a positive spin on the debacle.

"If this was to move forward there will be lots more meetings," Saunders said. "The property will need to be rezoned; that will go to Council. Then the project will go before the planning board. There will be abutters' notices. There will be meetings with you guys about what you want to see with this development."
During the meetings several abutters, including Mike Kirouac, said repeatedly they don't want this project "shoved down their throat," but the project is very much alive despite the solidarity Gonic residents showed once again.

In fact, Catholic Charities, which is the entity seeking to buy the land for a massive low-income apartment complex, already has a purchase and sale agreement with the city, according to Jeff Lefkovich, the executive director of real estate and senior living developments for Catholic Charities.
Curiously, the senior living component was never mentioned by Lefkovich on Thursday night, only the workforce housing, which would cap rents and utilities at 30 percent of a household's take-home pay.
Lefkovich told The Rochester Voice the purchase and sale with the city was signed over the summer and remains in effect 12 months. It allows them to do "due diligence" to determine if the project is feasible for them, he noted.
He said he could not divulge the price on the purchase and sale.

Just like they did at the Aug. 22 planning board meeting Gonic residents roundly assailed the apartment complex, saying it would destroy the character of their village, create enormous traffic pressures and likely lead to higher taxes due to increase school population and city services from fire and police.
When Lefkovich guaranteed there would be no Section 8 or public housing domiciled at the complex, many residents including former city councilor Chris Rice demanded to know how they could be so sure.
"Will it be in writing? Where?" Rice asked.
"It'll be in writing," replied Lefkovich of Catholic Charities, the fifth-largest charity in the United States.
In fact, next to the federal government, Catholic Charities is the largest U.S. social safety-net provider, according to Wikipedia. Its revenues in 2010 was almost $5 billion, with almost $3 billion of that coming from the federal government from taxpayer dollars.

For her part, Saunders, she of pitch fork fame for her colorful reference to Gonicans in an August email, refused to apologize for her verbiage, but said she had copies of the email to hand out that showed she said nice things about them, too.
"There will be a report from this session," she said cheerfully as the meeting ended. "We will get it out to you."
"And thank you to all of you," she added opening up her arms in appreciation of the crowd. "We really appreciate this feedback. This is exactly how the process should work."
There was no applause to the grandiose conclusion, however there was one final comment.
As she left the mic, one person in the audience, seemingly incredulous over her ebullient close, can be heard asking her, "Shanna, Shanna, do you understand from all this that we don't want this? We don't want it!"
"I understand that," she replied. "I am not the decision maker. I have no vote."