After reneging 3 times at plea & sentencing, it's: Three strikes and you're out 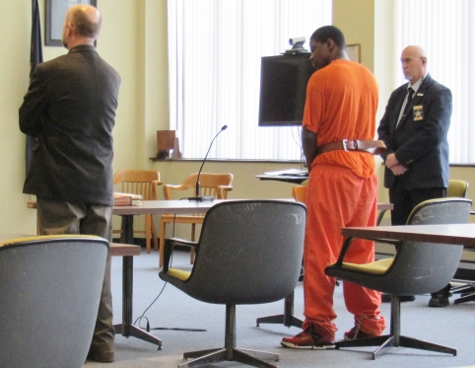 Defense lawyer Robert J. Watkins, left, asks Judge Mark E. Howard if he can be released from the case, a request granted by the judge, as defendant Rian Luther looks on Wednesday at Strafford County Superior Court in Dover. (Lebanon Voice photo)

DOVER - After a suspect in two violent robberies in Rochester last May asked for and got a third plea and sentencing hearing in two weeks - only to back out at the 11th hour each time - a visibly annoyed judge on Wednesday told him flatly, "no more plea deals."

It was just last Friday that Rian Luther, 33, had scheduled a plea deal that included transport from the Merrimack County Jail, but at the last minute reneged, telling a judge, "I ask them (the state) to prove it (their case)."

On Wednesday Strafford County Superior Court Judge Mark E. Howard warned Luther that this was his last chance to get a plea agreement and did he still want to renege on it.

"After this it will be a 'naked plea,'" Howard said, meaning Luther could still plead guilty before trial, but a judge, alone, would determine the sentence, with no guarantees.

After the warning Luther insisted he did not want the deal, paving the way for a trial, which will likely be several months away as Luther's defense lawyer Robert J. Watkins asked the court moments later to release him from the case as he and Luther had had "an irretrievable" breakdown."

Howard said in many cases he might not allow such a release, but having known Watkins for many years and the integrity he brought to the courtroom, he allowed him to do so.

Howard then vowed that even with the need now to have a new defense lawyer get up to speed with the case, he would do his best to keep it on a fast track to trial.

Luther faces more than 50 years in prison if convicted on all counts, which include first degree assault, armed robbery, conspiracy to commit robbery, burglary, criminal restraint and two counts of falsifying physical evidence.

The three other defendants in the case also face trials in the next few months.