After taking out the trash, city cleanup volunteers get their just desserts 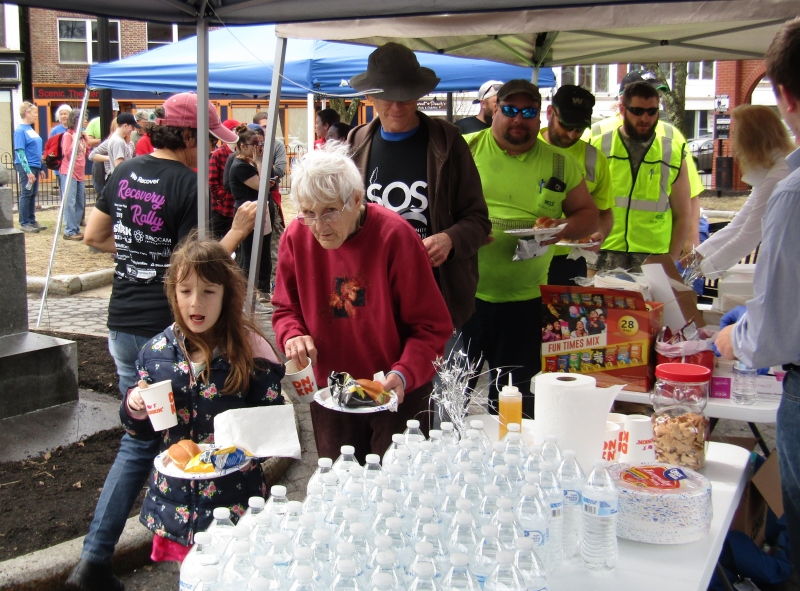 Mary Chase and her granddaughter, Razlyn Meeks, 7, make their from the food line to a picnic spot during Saturday's Cleanup Day luncheon at Central Square. (Rochester Voice photos)

ROCHESTER - Rochester's Riverwalk area, the Commons and its downtown sidewalks and parking lots are all waking up a little bit cleaner today after several hundred volunteers turned out to make it happen in just a few short hours on Saturday morning.

Among the volunteers were Mary Chase and her granddaughter, seven-year-old Razlyn Meeks.

Chase said she enjoys volunteering and that she and her granddaughter spent the morning cleaning up around the Rochester Public Library.

Razlyn said cleaning the library's yard was OK, but what she was looking forward to the most were the animal crackers that were dessert at a picnic lunch served to volunteers in Central Square after the cleanup was completed.

Rochester Main Street, Rochester Recreation, and Rochester Public Works all participated in organizing the event, which not only cleaned up the downtown and other public spots, but also cleared winter debris from roadways across the city.

Participants were treated to coffee and doughnuts during an early checkin and also lunch, which was donated by Moe's Italian Sandwiches.

The Rochester Voice (formerly The Lebanon Voice), which on Saturday was celebrating its seventh anniversary, was also on hand offering discounted annual subscriptions to all the volunteers, with a portion of the proceeds going to Gerry's Food Pantry.

Providing entertainment for the lunch were Bill Cormier and Peter Martin.