After two-year Covid hiatus, Wings and Wheels had everybody feeling sky high 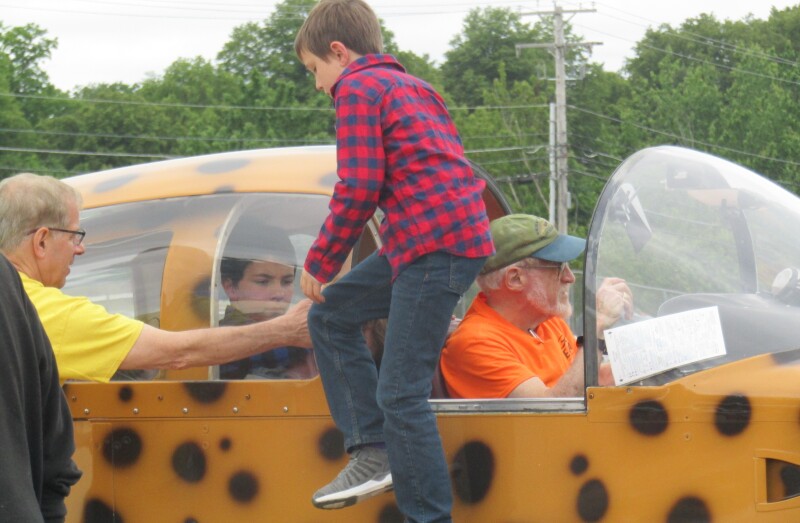 Aleric Day, 9, is helped down from the plane as his brother, Gidion, 11, sits in back after they, along with sister, Fiona, were taken on an airplane ride at Wings and Wheels on Saturday . (Rochester Voice photos)

ROCHESTER - You appreciate things more once you do without them for a while, and it was like that on Saturday as residents from Greater Rochester and across the state flocked by the thousands to celebrate the return of Wings and Wheels to Skyhaven Airport after a two-year Covid hiatus.
Of course the centerpiece of the festivities was all things aerial with the Young Eagles program, which gives free airplane rides to children 8-17.

Among the lucky youngsters were the Day siblings Aleric, 9, Gidion, 11 and Fiona, 8, who said they loved their first airplane ride that flew them all over Rochester.
The Young Eagles is made up of volunteer private pilots who give of their time - and gas money - to give children their first taste of flying.
While the volunteer pilots tried to fire up youngsters for a

potential career in aviation, Buffalo Wild Wing's wing-eating contest put some fire in the belly of seven contestants vying for bragging rights on who could best handle the heat.
But these weren't just any wings. They were wings made with the franchise's signature hottie, its Blazin' Carolina Reaper sauce. This super spicy sauce is measured at more than two million Scoville units, and features the Carolina Reaper pepper, hot red pepper sauce and roasted garlic.
Just before the contest emcee blew the whistle to start the challenge - to consume 10 wings in five minutes or less - he let the contestants know that if they blew their lunch they'd be immediately disqualified.
What followed was five minutes of gnarly gnawing and gruesome grimacing.
In the end three had finished within the five minutes, after which two judges checked over the remnants of the bones to see who had picked

them most clean.
Surprisingly the last of the three to finish won, since the cleanliness of his bones far outshone his competitors.
Winner Ryan Coon of Rochester, who won a free helicopter ride, said the secret to his success, the secret sauce so to speak, was "you eat it so fast you don't taste it."
Coon also won automatic entry into the Seacoast Seafood Festival's lobster eating contest at Hampton Beach this September.

Looks like it will be a long, expensive summer of training.
For those that didn't want to test their palate so, there were plenty of less contentious food options, including Mitchell Hill BBQ, Sausage Express, Costin's Concessions, Forkin Grub, Miss Polly's and several others including a cotton candy kiosk that was so popular the owner said he'd run out of product by 1 p.m.
Other busy spots included a bounce house and kids play area, a Super Heroes corner featuring Hulk, and tours of fire engines and

police tactical vehicles.
There were also scores of classic cars from older-model vintage Corvettes and Roadrunners to the enigmatic Gremlin, which was widely scorned by the public for its style, or lack thereof, during its production in the 1970s.
(This writer actually did a double-take when he saw it among the other classics.)
There were also a multitude of vendors on hand at the north end of the festival area, including Relay for Life,

Meredith Valley Savings Bank, Rochester Republicans, Cocheco Quilters, Convention of States, Rochester Public Library, Holy Rosary Credit Union, At Home Sign Making Parties and Cub Scout Pack 184 of Rochester.
Entertainment was provided by the Just Right Brass quintet, Zac Francis, Studio 109 Dance and the McDonough Grimes Irish Step Dance group.
Wings and Wheels was hosted by the Rochester Police Department, the Rotary Club of Rochester, Skyhaven Airport, and Pease Development Authority. There was no admission charge, however, attendees were encouraged to make a donation to benefit local Rochester nonprofits. Those at the gate said many also brought food donations since in the past Gerry's Food Pantry was the main benefactor.