After we closed state mental hospitals, 'We never kept our end of the bargain' 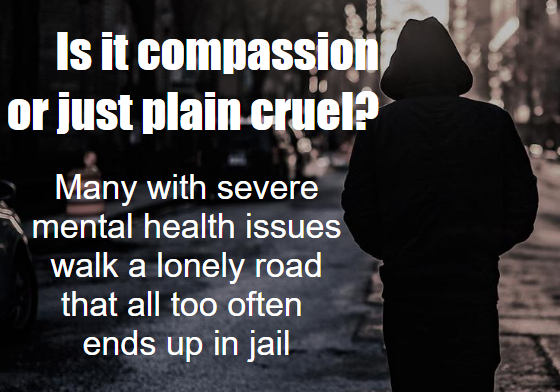 Editor's note: Today The Rochester Voice publishes its third of a four-part series on how and why those with mental health issues too often end up in the government's penal system and what are some of the strategies posed to mitigate the problem ... and why all too often those strategies have failed.

Today, New Hampshire's chief advocate for those suffering from mental health issues argues that re-institutionalization would be a bad thing and why funding for more community involvement and outreach is the only humane direction to take.

Rather than building bigger hospitals or jails to treat those with severe mental illness, the state's leading advocate for the mentally ill says they need more resources at the local community level, not more beds in Concord.

Unfortunately, the biggest bugaboo toward that end is not the lack of intent to reform how the justice system interacts with those with SMI, it's the lack of money necessary to change the dynamic.

When we emptied out the state hospitals in the '60s and '70s that was a good thing, but we never kept our end of the bargain to get effective treatment closer to home. We haven't done that," said John Broderick, senior director of external affairs for Dartmouth-Hitchcock Medical Center.

Broderick, a former chief justice of the New Hampshire Supreme Court, has been at the center of advocacy to reform mental health in the Granite State. He said the major reason SMI sufferers have been left twisting in the wind is a lack of funding.

The dearth of money is for a myriad of reasons, he said, from reluctance to earmark taxpayer dollars to medicaid reimbursement rates for mental health providers.

Broderick said while he couldn't comment on the predicament of an individual who was arrested by Rochester police last month for allegedly running into traffic, he did say what they appear to be going through is typical. That is, they are charged and held till they move through the justice system before being assigned to mental health court or just released with no restrictions.

Still, Broderick sees no value in their being involuntarily committed unless they are proved to be a danger to themselves or others.

"That's a pretty high bar to prove that," said Broderick, who survived his own brush with mental illness when his son - who was suffering from SMI - attacked him in 2002.

Broderick said that prior to deinstitutionalization the state hospital in Concord, the state's largest provider for inpatient SMI treatment, had some 2,500 beds. Now they average 130-140.

"That's fine on some days, not so great on others," he said.

He said if necessary funding became available the mental health landscape would reflect a "strong commitment that would have community health centers and timely treatment."

"But we haven't kept that end of the bargain," he added. "As a result a lot of people with chronic mental illness don't know where to turn."

Broderick said it is doubtful a 10-year state plan to improve community access will get the funding it needs.

"One in five adults have SMI," he said. "If one in five were dying of a heart attack or cancer, the money gets there, but not for mental illness."

Broderick's experience with his son's mental illness culminated in his March 2002 assault on his father in which he pummeled the sleeping judge with a guitar, a savage beating Broderick doesn't remember but put him in intensive care with a broken jaw and other serious injuries for weeks.

His son, Christian, then 30 and a longtime abuser of alcohol, spent three years in state prison before being paroled. John Broderick spent months recovering from his injuries.

Broderick has long said that "the cost of not treating mental illness is much higher than the cost of success."

Tomorrow, a look at what Strafford County and Rochester are doing to try to make the local Mental Health Court work for those in need.