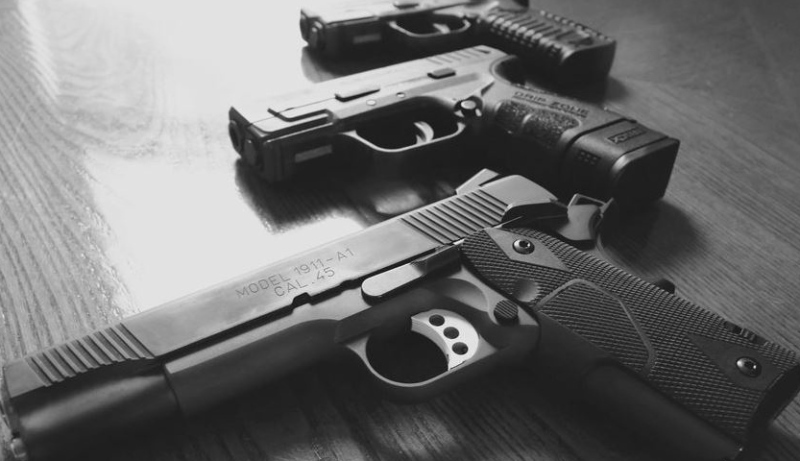 The initiative includes utilizing red flag laws and coordinated prosecution of criminals who use guns to commit crimes or as part of their drug enterprise. (Courtesy photo)

Reducing gun violence and enforcing federal firearms laws have always been among the Department's highest priorities. In order to develop a new and robust effort to promote and ensure public safety, the Department reviewed and adapted some of the successes of past strategies to curb gun violence. Project Guardian draws on the Department's earlier achievements, such as the "Triggerlock" program, and it serves as a complementary effort to the success of Project Safe Neighborhoods. In addition, the initiative emphasizes the importance of using all modern technologies available to law enforcement to promote gun crime intelligence.

"Gun crime remains a pervasive problem in too many communities across America. Today, the Department of Justice is redoubling its commitment to tackling this issue through the launch of Project Guardian," said Barr. "Building on the success of past programs like Triggerlock, Project Guardian will strengthen our efforts to reduce gun violence by allowing the federal government and our state and local partners to better target offenders who use guns in crimes and those who try to buy guns illegally."

"In New Hampshire, gun violence is linked to the trade in opioids and other illegal drugs," said U.S. Attorney Scott Murray. "It is essential that we utilize all law enforcement resources to curtail the ability of drug dealers to acquire firearms through illegal means. These include straw purchases, lying on federal firearms forms, and possession by convicted felons and others who are disqualified from gun ownership under federal law. Through Project Guardian, we will work to strengthen law enforcement partnerships that can have a major impact on gun crime and reduce the availability of firearms for drug dealers and other criminals."

"ATF has a long history of strong partnerships in the law enforcement community," said Acting Director Regina Lombardo. "Make no mistake, the women and men of ATF remain steadfast to our core mission of getting crime guns off of our streets. ATF and U.S. Attorneys nationwide will leverage these partnerships even further through enhanced community outreach initiatives and coordination with local, state, and tribal law enforcement and prosecutors to cut the pipeline of crime guns from those violent individuals who seek to terrorize our communities. Project Guardian will enhance ATF's Crime Gun Intelligence, to include identifying, investigating and prosecuting those involved in the straw purchases of firearms, lying on federal firearms transaction forms, and those subject to the mental health prohibition of possessing firearms."

Project Guardian's implementation is based on five principles:

1) Coordinated Prosecution. Federal prosecutors and law enforcement will coordinate with state, local, and tribal law enforcement and prosecutors to consider potential federal prosecution for new cases involving a defendant who: a) was arrested in possession of a firearm; b) is believed to have used a firearm in committing a crime of violence or drug trafficking crime prosecutable in federal court; or c) is suspected of actively committing violent crime(s) in the community on behalf of a criminal organization.

2) Enforcing the Background Check System. United States Attorneys, in consultation with the Special Agent in Charge of the Bureau of Alcohol, Tobacco, Firearms and Explosives (ATF) in their district, will create new, or review existing, guidelines for intake and prosecution of federal cases involving false statements (including lie-and-try, lie-and-buy, and straw purchasers) made during the acquisition or attempted acquisition of firearms from Federal Firearms Licensees.

3) Improved Information Sharing. On a regular basis, and as often as practicable given current technical limitations, ATF will provide to state law enforcement fusion centers a report listing individuals for whom the National Instant Criminal Background Check System (NICS) has issued denials, including the basis for the denial, so that state and local law enforcement can take appropriate steps under their laws.

4) Coordinated Response to Mental Health Denials. Each United States Attorney will ensure that whenever there is federal case information regarding individuals who are prohibited from possessing a firearm under the mental health prohibition, such information continues to be entered timely and accurately into the United States Attorneys' Offices' case-management system for prompt submission to NICS. ATF should engage in additional outreach to state and local law enforcement on how to use this denial information to better assure public safety.

Additionally, United States Attorneys will consult with relevant district stakeholders to assess feasibility of adopting disruption of early engagement programs to address mental-health-prohibited individuals who attempt to acquire a firearm. United States Attorneys should consider, when appropriate, recommending court-ordered mental health treatment for any sentences issued to individuals prohibited based on mental health.

5) Crime Gun Intelligence Coordination. Federal, state, local, and tribal prosecutors and law enforcement will work together to ensure effective use of the ATF's Crime Gun Intelligence Centers (CGICs), and all related resources, to maximize the use of modern intelligence tools and technology. These tools can greatly enhance the speed and effectiveness in identifying trigger-pullers and finding their guns, but the success depends in large part on state, local, and tribal law enforcement partners sharing ballistic evidence and firearm recovery data with the ATF.

For more information on Project Guardian, see the Attorney General's memorandum at: https://www.justice.gov/ag/project-guardian-memo-2019/download.