Age discrimination aside, the fact is most elderly drivers are among the safest 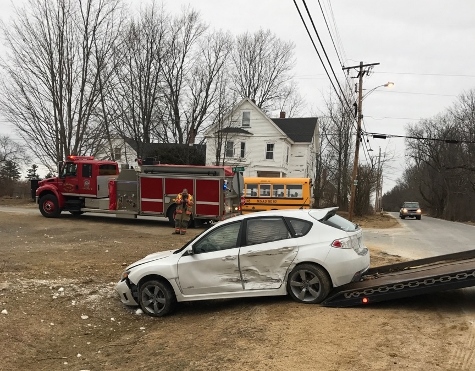 Scene of a collision involving a school bus drivine by an elderly Lebanon woman earlier this month. (Courtesy photo)

Three weeks after an elderly SAD 60 school bus driver missed a Lebanon stop sign and collided with another vehicle, and three days after another elderly woman driver from Acton crashed into a Shapleigh restaurant, the issue of aging drivers has again resurfaced, but studies and statistics say not to worry because elderly drivers are among the safest.

In fact, both SAD 60, which covers schools in Lebanon, Berwick and North Berwick; and SAU 64, which covers Milton and Wakefield, have no maximum age cutoff on school bus drivers.

"It used to be that if they were over either 70 or 72, they were required to do "pretrip" and driving skills tests each year, but then it was considered to be age discrimination, so they (New Hampshire) discontinued that," said SAU 64 transportation director Tim Eldridge on Tuesday. "Now it's up to the (bus provider) company."

In fact aging drivers pose a conundrum for safety officials, because of a dichotomy of sorts.

Because seniors tend to wear seat belts, observe the speed limit, and don't drink and drive, elderly driver crash rates continue to drop, however older drivers - due to factors like worsening vision, hearing and medical conditions - are more likely to be injured or killed in crashes that are often more serious than middle aged drivers.

Thankfully in the two crashes noted above neither woman nor anyone else involved in the two accidents were seriously injured.

The accident involving the school bus occurred on March 7 when a Lebanon man was slightly injured when the school bus carrying one student and their adult assistant collided with his vehicle after the bus failed to stop at a Center Road stop sign, police say.

All three on the bus were unhurt.

Maine State Police Trooper John Darcy said the bus driver, who is from Lebanon, did not come to a complete stop at the intersection and drove into the path of the car.

The school bus driver, however, was not cited.

Meanwhile, Eldridge said he has complete confidence in all the bus drivers employed by SAU 64, the oldest of whom is 83.

Darcy was not immediately available for comment on this report, while SAD School Superintendent Steven Connolly did not return several calls for comment.