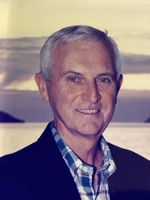 DOVER - A fighter until the end, Alan H. Dugan found his peace on Saturday, July 11, 2020 surrounded by love at the age of 77. He faced many health battles over his lifetime. Cancer unsuccessfully tried to take him four times, his heart went haywire twice, and over the past 18 months his lungs also decided to give him hell. Through every tribulation, Alan fought with grace and fortitude, laser-focused on the love of family and friends and the desire to be present with them again as soon as possible.
Born on April 18, 1943 in Sharon, Pa., to Fred and Doris Dugan, Alan graduated from Lehigh University in 1965. Upon graduation (he liked to remind us "the next Monday") he started his long and successful career with TPF&C (Towers Perrin), retiring in 2001 as a Managing Director, surrounded by cherished co-workers/friends.
While professional success was hard-earned, finding love simply required attending high school. Alan met Lynne Hope Heward as a junior but they didn't start dating until their college years. They were married in 1964 and took great pride in their 56 year union. Three boys soon followed. Jim Dugan (Suzanne), David Dugan (Stefanie) and Alan (Tad) Dugan (Valerie Southgate). Raising three boys was his greatest joy and most treasured accomplishment. A dad, coach, mentor, leader, task-master, boat captain, golf partner, constant organizer and so much more. Alan and Lynne provided a life filled with special moments, many linked to beaches, soccer fields and hockey rinks.
Alan cherished summers in Ocean City, N.J., watching his children and eight grandchildren ride the waves and play in the sand. He also loved captaining his boats with Lynne at his side.
Alan was preceded in death by his parents Fred and Doris Dugan and his dear youngest son Tad Dugan. We take comfort knowing father and son are reunited and enjoying fast cars and big waves together. And we suspect his mom has a warm apple crisp and vanilla ice cream waiting for him.
Alan is further survived by his sister Phyllis Gill (Bill), brother James Dugan, niece Susie Kleinschmidt (Jeff), aunt Anne Dugan and cousins Nancy Dugan, Bill Dugan (Michelle) and Richard Dugan and his beloved grandchildren (whom he loved to spoil): Connor Dugan, Wyatt Dugan, Jack Dugan, Milo Dugan, Cameron Dugan, Benson Dugan, Tenley Dugan and Taylor Dugan. He was so proud of these wonderful living legacies and excited by what their futures held for them. Last but not least, he will be dearly missed by his constant side-kick, his four-legged buddy Mo.
Alan's passing leaves a great void but greater memories.