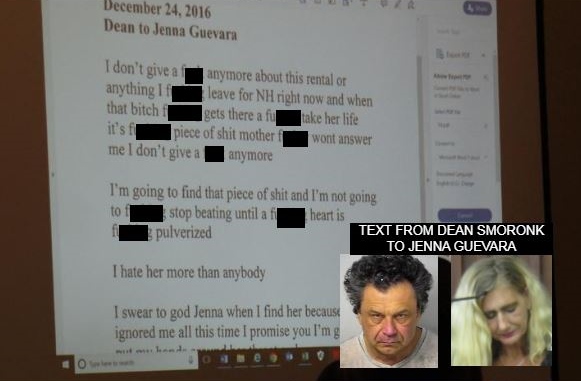 DOVER - Some in the courtroom wept, others couldn't help but laugh softly as they listened Tuesday to Alexa recordings of Tim Verrill and one of the woman he is accused of killing both banter with the voice-activated home assistant in the hours before her death.

Verrill, 37, of Dover, is facing two first-degree murder charges in the Jan. 27, 2017, deaths of Christine Sullivan, 48, of 979 Meaderboro Road, Farmington, and Jenna Pellegrini, 32, of Barrington. He faces life in prison without parole if found guilty.

Jenna Guevara, of Fort Myers, Fla., identified the voices of Verrill and that of Sullivan, her longtime close friend, as the jury and courtroom fell silent to listen to the haunting repartee.

Sullivan was often more playful than demanding with the AI device, saying things like:

"Alexa, are you snobby?"

"Alexa, why are you ignoring me?"

"Alexa, what do you suggest music-wise?"

Meanwhile, Verrill can be heard asking Alexa to play songs like "Fire on the Mountain" by Grateful Dead, "Tall Buildings" by John Hartford and songs from the band The Devil Makes Three.

During the recordings, the two are obviously enjoying themselves, with Guevara describing some portions where Verrill is talking and Sullivan can be heard giggling in the background.

Pellegrini is not heard during the sequence, and thought to be a different part of the Meaderboro Road house.

Guevara also described Verrill as childlike and his relationship with convicted drug trafficker and longtime Sullivan boyfriend Dan Smoronk as "unhealthful," adding Verrill appeared to be someone who could be persuaded to do anything.

At the same time, she heaped praise on Verrill, saying he had been wonderful with her son, who suffered from both autism and cancer.

"He loved to sit on the couch and play video games with my son," she said. "He loved to teach him stuff about the games."

Meanwhile, a text message from Smoronk to Guevara on Christmas Eve 2016, about a month prior to the two women's deaths, showed his increasing frustration and anger with Sullivan, who was apparently beginning to ignore his messages. The message also reveals a particularly virulent and violent side of his personality.

An image of the text displayed on a projections screen read, in part, "I'm going to find that piece of shit and I'm not going to fucking stop beating until a fucking heart is fucking pulverized."

Guevara also characterized Verrill as being nearly as devoted to Sullivan as he was to Smoronk.

He loved her, and she "treated him like a child ... he was caught in the middle."

Senior Assistant Attorney General Peter Hinckley spent much of his cross-examination time with Guevara establishing her many contacts with Smoronk in Southwest Florida in the days leading up to the killings and even on Saturday, the day Smoronk took an evening flight back to Boston.

Guevara said when she spoke to Smoronk late on Friday, Jan. 27, 2017, just hours after their deaths, Smoronk was crying and upset after seeing pictures taken earlier in the day that showed portions of his Farmington home in disarray.

The trial, now in its 10th day, continues today with more defense witnesses. It's not clear whether Smoronk, whom the prosecution chose not to call as a witness, will testify for the defense.