All we got is hope: State sees first dramatic daily reduction in new confirmed cases 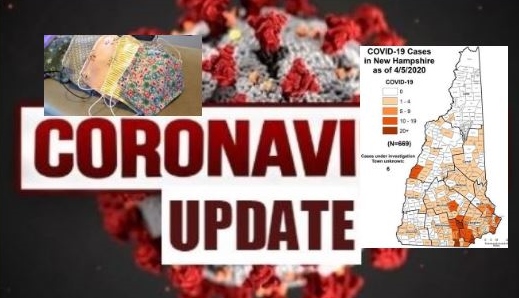 CONCORD - Sunday saw New Hampshire's first dramatic drop in the number of confirmed new COVID-19 cases since the state of emergency began more than three weeks ago, however officials don't know whether it signals a downward trend or not until more numbers become available later this week.

U.S. health officials told Americans over the weekend they should brace themselves this week for a tough haul as a misery surge has been predicted. 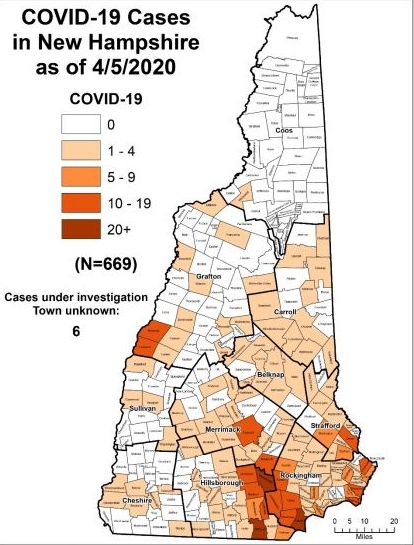 Previous to Sunday's numbers, the previous days new confirmed case numbers were as follows: 81 on Saturday, 61 on Friday, 64 on Thursday, 48 on Wednesday, 53 on Tuesday and 56 last Monday.

No new deaths were reported on Sunday.

Several of the new cases are still under investigation, but of those with complete information, all are adults with 40 percent being female and 60 percent male.

The new cases reside in Rockingham (16), Hillsborough County other than Manchester and Nashua (7), Merrimack (5), Strafford (1), Carroll (2), and Cheshire (1) counties, and in the cities of Nashua (6) and Manchester (4).

Six new COVID-19-related hospitalizations were reported; thus far, 92 (14%) of the 669 positive cases have been hospitalized. Sixteen of the new cases have no identified risk factors as community-based transmission continues to increase in the State and has been identified in all counties with cases.

Along with the grim numbers predicted across the nation this week, federal and state health officials urged all Americans to wear a cloth mask when out in public.

The sentiment was echoed by Presidential COVID-19 Task Force member Dr. Anthony Fauci on a Sunday morning talk show. Fauchi told "Face the Nation" host Margaret Brennan that he always wears a mask when he's in an environment in which he has no control over social distancing such as a grocery or convenience store.

The government is urging the use of the cloth masks as surgical masks and N95 respirators are in short supply and should be reserved for healthcare workers or other medical first responders, as recommended by CDC guidance.

Locally, there was only one new confirmed case listed in Strafford County for a new total of 44.

Other local cities and towns include Dover at 10-19 cases, while Rochester, Farmington, Milton and Somersworth are at 1-4 cases apiece. Barrington is listed as having 5-9.

Persons Being Monitored in NH (approximate point in time) 2,100