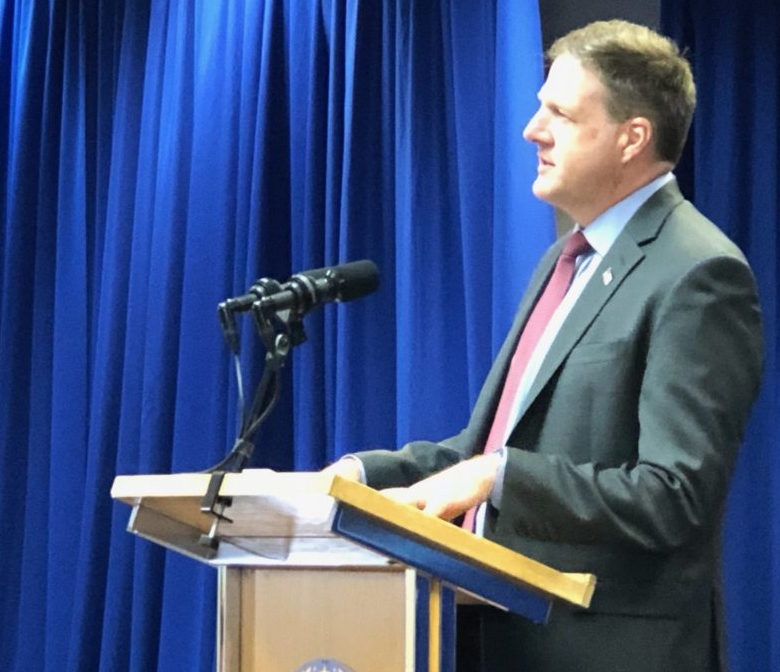 During his Thursday press conference, Gov. Chris Sununu said these were the "last large hurdles" to reopening under the pandemic because of concerns for health and limiting the spread of COVID-19. Now is the time to allow those doors to open again as an important part of the state's economy under the "Better at Home" guidelines, he said.

When asked if there will be a public hearing on the nomination of Scott Mason to be the new executive director of the Fish and Game Department, Sununu said:

"If the (Executive Council) wants to hold a public hearing they can do that." But Sununu said, it might have to happen telephonically. "You don't want that department to go without a director for too long," he said, noting that Glenn Normadeau has been serving in a holdover status.

Negative Test
Sununu said he tested negative for COVID-19 as part of the state's new ASAP program for asymptomatic people and urged others to do the same, particularly as they return to work after three months under stay-at-home measures which have now lapsed.

The state has had over 109,000 people tested for the virus and now the percentage of positive cases is at between 2 and 3 percent.
On Thursday, there was one new death reported in New Hampshire with 17 new cases for a total of 5,450, with two new hospitalizations totaling 543 over the course of the pandemic. The one death now means that the state has lost 331 mostly at long term care facilities.

"Our data is trending in the right direction," said Lori Shibinette, commissioner for the state Department of Health and Human Services with current hospitalizations also showing "a good trend" with declining rates.

Two long-term care facilities were cleared from the list of outbreaks of having more than 3 test positive. Mountain Ridge in Franklin and the Ridgewood Center were cleared off the outbreak list, Shibinette said.

Sununu said he would not plan to attend any large political rallies right now and though there is "a free speech voice to be heard" people should be very cautious going to such events. He said it is good for people to "carry a little worry," when going outside, noting he is living a "boring life" like most others, at home.

Friday is Juneteenth, a celebration where the state will recognize the abolition of slavery. The state codified the day's observance into law last year.
"It is a time to recognize African American freedom and achievement," Sununu said, "It's timely, I think," given the protests across the nation and world decrying police brutality based on race.

"We heard from a variety of folks," after Sununu said he announced the 45-day study this Tuesday, which will be headed by Attorney General Gordon MacDonald and is expected to hold its first meeting early next week. The governor has charged them to bring ideas forward to change and improve law enforcement interactions.

On Thursday morning, Sununu said emails went to everyone who applied for the $400 million federal CARES Act money for Main Street businesses and those under $20 million in revenue. He said the checks should go out later Thursday.

"It's fairly exciting," Sununu said. Those who believe they were denied improperly will have an appeals process, he said, and next week a new program to help the self-employed will be announced. On Tuesday, he announced there were 13,075 pre-qualification applications and 5,466 grants approved. There were 4,742 self-employed.

June 21 will mark a year since seven motorcycle riders were killed in Randolph, part of the Jar-Heads Motorcycle Club. Sununu.

"They were just out for a ride when they were killed by an oncoming vehicle," he said, noting that there were "a lot of issues," related to the tragedy, including prosecution of the driver which is still moving through court.

He said there was "a very touching tribute," a motorcycle ride over 100 miles from Laconia to Randolph to honor the fallen. Sununu noted the road to Randolph was lined with flags.

"It was really a tragedy. We lost a lot of our heroes that day," Sununu said.