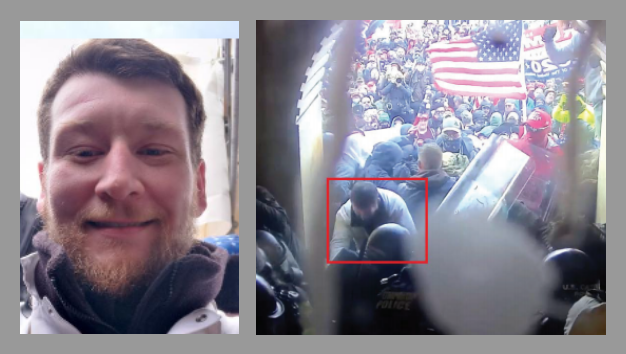 A photo attached to the criminal complaint purports to show Kyle Fitzsimons charging at a Metropolitan DC police officer. Fitzsimons says he was only trying to defend himself. Left, a photo of him just prior to going to the Capitol on Jan. 6.

WASHINGTON - A new motion by U.S. attorneys says a Lebanon man charged in the Capitol unrest of Jan. 6 should not be given pretrial release because angry phone calls to the office of 1st District Congresswoman Chellie Pingree prior to his trip to Washington show him a danger to the community and flight risk.

Kyle Fitzsimons, 37, of Gully Oven Road, is currently being held at the DC Central Detention Facility after being transferred there on March 22 following a six-week stint at a Rhode Island jail.

Fitzsimons waived his right to argue bail until he had been transferred to Washington, but it is not clear whether he has a public defender yet.

The pubic defender's office in Washington has refused to name his counsel and told The Rochester Voice they would have no comment on the case.

The motion seeking to keep Fitzsimons in jail prior to trial states that he, "was reported to be very aggressive, shouting and yelling" during a December phone call with Pingree's office and said ''we're coming for her' (Pingree).'"

"He urged the Congressperson to dispute the election results in January," the motion continues. "He stated that Biden is a corrupt skeleton and that this is going to be civil war."

The motion also noted a call from March 2020 in which Fitzsimons called her office to demand the number for Chinese President Xi Jinping.

The motion calls for Fitzsimons to be held because he is a danger to the community and a flight risk.

It also refers to a text message from his wife to demonstrate that he would be unlikely to be supported from his closest family members if released.

He has yet to make a plea in the case, and while the no-bail motion has been filed, Fitzsimons still has not had a bail hearing. He faces more than 13 years in federal prison if convicted on all charges.

He was arrested at his Gully Oven home on Feb. 4.

Fitzsimons told The Rochester Voice in a Jan. 11 article that he went to the Capitol not to stoke violence, but to protest voting irregularities and support President Trump in efforts to decertify what was seen by many - including a large number of state legislature in five swing states - as an election fraught with statistical anomalies, compromised voting machines and even video evidence that showed ballot counting irregularities.

In the article Fitzsimons said he was unwillingly swept up in a "horde of humanity" outside the Capitol that pushed him toward a police line where he was struck on the head.

He said after he was struck he was helped by Good Samaritans who helped him get to a D.C. hospital where he received six stitches for a gash on his head.

He told much the same story to Lebanon selectmen on Jan. 7, a day after the unrest occurred at the Capitol.

Fitzsimons is well known in Lebanon as a second-amendment activist. He also served as a member on the town's Cannabis Committee.