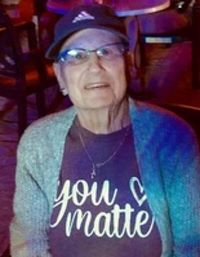 BARRINGTON - Anne Garceau, 75, formerly of Marlborough, Mass., died peacefully at home on Thursday, September 9. She was the daughter of the late Frank and Rita Padula and the sister of the late Robert Padula. Anne enjoyed taking many motorcycle trips with her husband, and was often seen riding with her beloved dog Cricket in her younger days. After moving to New Hampshire in 1986, she had lots of time to spend with her family. She enjoyed spending vacations with them, being together as often as possible, and making lasting memories. Later on, Anne became the President of her mobile home Cooperative Park where she worked very hard to make various improvements. She made some unforgettable friendships along the way. She enjoyed summers at her lake house on Frye Island, Sebago Lake, Maine for many years. She was an avid golfer and was very involved with the island community. It was her happy place where she made many everlasting friendships. She was also a member of the Our Lady of the Holy Rosary Parish and was very connected to her faith.

Besides her husband Robert (Gizzy) Garceau of 55 years, she leaves behind her daughter, Christine Marston and her husband, Philip, of Barrington and her daughter, Pamela Boivin of Maine. She had 5 grandchildren; Adam, Nick, Paige, Shane, and Garrett, who she loved dearly. Anne will be greatly missed but will live on forever in our hearts.