Another furious virus spike, but could case numbers provide ray of hope? 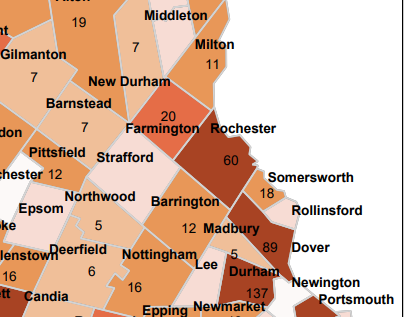 CONCORD - DHHS reported yet another staggering increase of newly identified coronavirus infections on Wednesday, but a snapshot of hospitalizations and deaths among those tested during a recent six-day timeframe may kindle some hope for those concerned over the continuing November surge.

The 447 new positive test results for COVID-19 represent a PCR test positivity rate of 2.4 percent and included 45 minors and 34 from Strafford County.

Local case numbers continue to rise, with Rochester now at 60, Dover at 89,
Somersworth at 18, Farmington at 20, Barrington at 12, Milton at 11 and Strafford at none.

Meanwhile, numbers released by a DHHS spokesman on Wednesday show that of the 2,343 cases identified from Nov. 10-16, eight have been hospitalized and four have died.

Those numbers among that singular group show a hospitalization rate of .34 percent and a death rate of .17 percent as of today.

DHHS spokeman Jake Leon noted that those numbers may change as there is usually a lag "between when a person tests positive, when their illness requires hospitalization, and when deaths occur."

DHHS has reported no deaths under the age of 60 in many months even as testing among children and adults has skyrocketed due to testing mandates for athletes and students.

DHHS data also shows that even though more than 700,000 tests have been administered in New Hampshire, only about a quarter of the Granite State's 1.3 million residents have taken the test.

Persons Being Monitored in NH (approximate point in time) 6,375