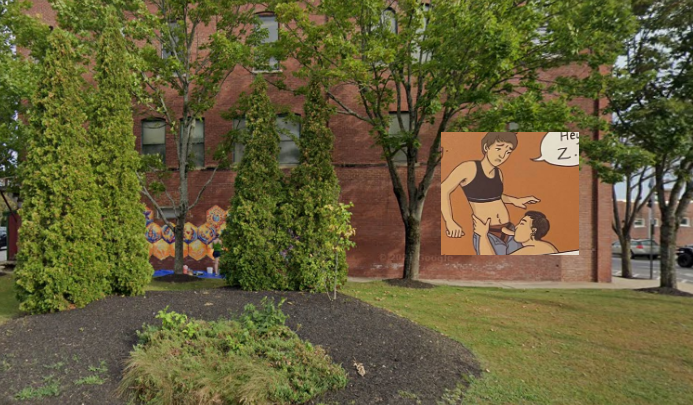 The images inside a book currently on the shelf at RPL might not pass muster for a downtown mural. What say you?

It's amazing that 12 out of 13 folks on the City Council, including the mayor, are so out of touch with their constituency that they would cancel an agenda item to discuss an image of what many would characterize as "child pornography."
The Rochester Voice interviewed seven parents waiting in cars to pick up their children from Rochester Middle School on Friday, all of whom were shocked and disgusted with the images shown that are present in Gender Queer: A Memoir, a graphic novel that is among the offerings available for checkout at the Rochester Public Library.

Some of the images in the book depict oral sex between juveniles.
City Councilor Dana Berlin made the motion during a Sept. 6 City Council meeting to cancel the agenda item requested by City Councilor Jim Gray.
Ashley Desrocher seconded the motion and all but Gray voted to remove the agenda item.
The vote came immediately following a 23-minute secret meeting of the City Council held behind closed doors with no access to the press and public.
When Gray explained his reasoning for wanting to discuss the book he was laughed at and mocked by a large crowd from the LGBTQ community.
When a barrage of catcalls and jeers aimed at Gray resounded through City Council chambers Rochester Mayor Paul Callaghan failed to gavel the boisterous crowd to order.
Callaghan told The Rochester Voice on Saturday he didn't hear them.
But at The Rochester Voice we do hear the people who are disgusted with this book.
Comments from City Council during brief remarks on the book ranged from "This is not our job, It's none of our business," from Amy Malone to "It's sad we don't have an opportunity to discuss our disgrace" from Tim Fontneau.
If Berlin, Malone and all the other councilors except Gray believe that the City Council is not the place to have this discussion, where then?
If anyone thinks they were put on the City Council to be an ideologue, think again.
Take the images displayed with this article and walk up and down any street in your ward and see if your constituents are in lockstep with your views.

We doubt it.
It should be noted that since the controversy over the book, it has been moved from the Young Adult section to the adult section, but RPL staff told The Rochester Voice all sections of the library are open to the general public, including children.
Callaghan was asked on Monday to comment on why he thought he was doing a service to the community by not allowing City Manager Blaine Cox to report back to the council on the book after consultation with the head librarian, Marie Lejeune.
Lejeune, Library Trustee chair Peg Higgins and Callaghan have all failed to return messages from The Voice this week.
While City Council has no qualms about having such materials at the library, Rochester's City Charter, itself, may disagree.
One section of the City Charter that seeks to regulate murals says they can be approved as long as:
"The mural contains no defamation, incitement, obscenity, illegal content, or images of child pornography. Obscene matter is that which the average resident of the City, applying community standards, would find, taken as a whole, appeals to a prurient interest and lacks serious literary, artistic, political, or scientific value."
So could the city commission an artist to draw mural downtown or at The Ridge that would replicate the image attached to this article?
Maybe the Rochester Museum of Fine Art would like to put a display of such images in the Mayor Harvey Bernier Room at the James W. Foley Memorial Community Center?
There's an agenda item for you.