At R. W. Creteau Tech Center, a grand opening it was! 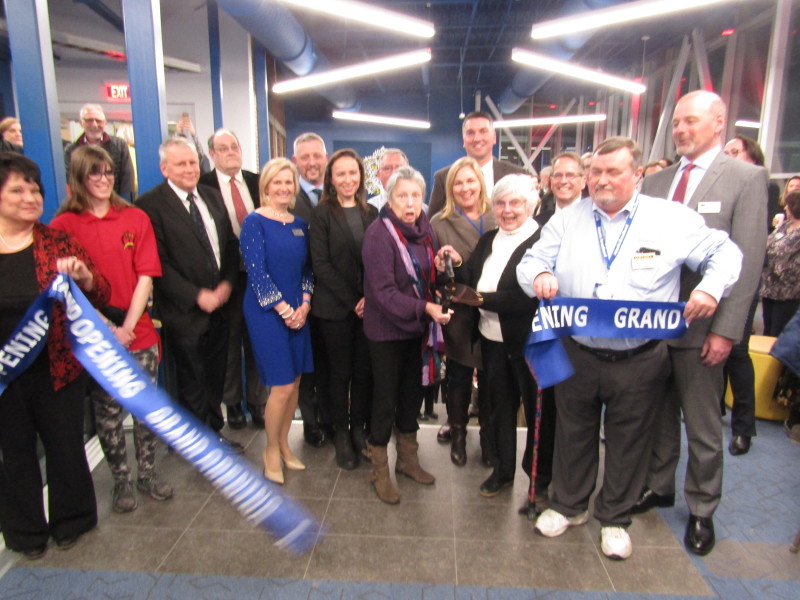 Rochester Mayor Caroline McCarley along with other education, business and city officials participate in a ribbon cutting to celebrate the grand opening of the new and improved R.W. Creteau Technology Center on Wednesday night. (Rochester Voice photos)

Editor's note: On Friday The Rochester Voice will take a closer look at the improvements made in the just-completed R.W. Creteau Technology Center improvement project.

ROCHESTER - This morning the some 500 students enrolled at the R.W. Creteau Technology Center are back at work learning trades and skills that will last a lifetime, but Wednesday night was a time to celebrate the grand opening of the city's newly renovated educational jewel, a jewel that will sparkle for years to come.

Some 300 attended the grand opening celebrating the $16 million renovation project that began 19 months ago, often gasping in awe at the state-of-the-art facilities that prepare Rochester-area high school students for careers in 16 professions, but it was perhaps New Hampshire Education Commissioner Frank Edelblut who put it best.

"When you come into this place it takes your breath away," said Edelblut, who credited the entire

community of Rochester, including business leaders for what they had achieved.

Michele Halligan-Foley, the center's director opened the ceremony by saying, "It took a village to make this happen. What we've done is create something that empowers students to become a community that can use critical thinking skills and think as a team."

In a dedication read by Rochester Mayor Caroline McCarley, Gov. Chris Sununu hailed the Creteau Tech Center as a monument of education that will be

an inspiration to countless students to come as a "legacy of innovation."

Downstairs the fruits of the center's Restaurant Management Program were on full display with high-end hors d'oeuvres prepared and served by the students.

The Restaurant Management Program also operates the OuR House Café, which is open to the public serving delicious food Wednesday-Friday. (This Friday it's closed for teacher workshops.)

Other major improvements to the Tech Center include a full-service HRCU branch bank, an expanded automotive repair space and a sun-splashed upstairs student lounge.

Funding for the improvements came from a mixture of state and local funding, but former Supt. Mike Hopkins, who oversaw much of the project before current Supt. Kyle Repucci took over, said it was the community at large that made this happen, including business leaders and others.

"This project brought the whole community, all the stakeholders together," he told The Rochester Voice after the ceremony.

Hopkins also added his thanks to the Rochester School Board for their leadership and support.

To commemorate Hopkins' role in seeing the project through, a plaque was unveiled on the wall of the tech center's Personal Learning Commons where students mentor with each other and instructors on class and team projects.

After the dedication ceremony of the plaque a jubilant and joyous ribbon cutting was held at the top of the stairs facing the Personal Learning Center.