At the Castle, Tulsi draws a diverse political crowd that wanted to hear more 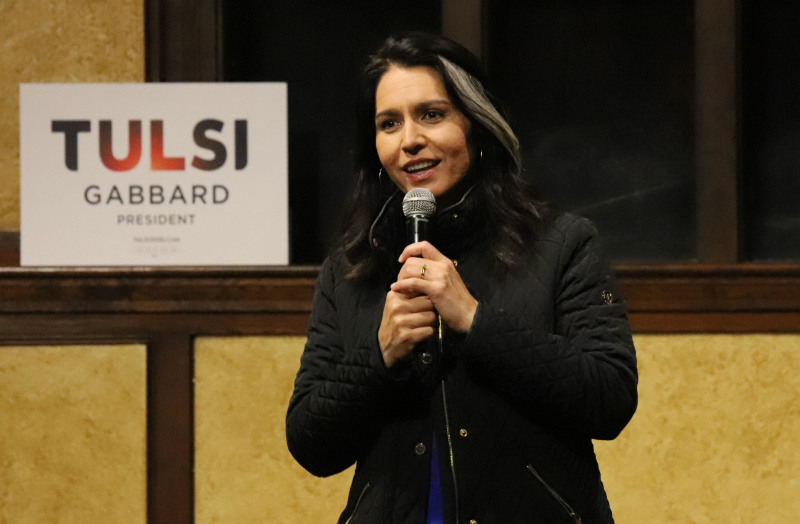 ROCHESTER - Democratic presidential nominee hopeful Tulsi Gabbard, a lightning rod in recent debates and polling fifth in New Hampshire, held a Town Hall at the Castle on Charles on Wednesday where she spoke to about 60 folks who came out to see what this seemingly unflappable force had to say.

Among the crowd were "never Trumpers," "ever Trumpers," Democrats, Independents and Republicans, among them Raymond Duffina of East Rochester, an Independent who voted for Trump in 2016. He might not get Duffina's vote this time.

"She's the only Democrat who makes any sense to me," said Duffina, who likes Gabbard's noninterventionalist stance on foreign wars. "We have to bring the guys home. I'm more conservative. I voted for Trump last time, but if she goes up against him, I'll vote for her."

Gabbard, herself, joined the armed forces following 9/11, serving two deployments to the Middle East, including one as a combat field medical office in Iraq in 2004.

"I like the way she answers questions," Moses said. "She's truthful, and has held her own against all opponents."

Gabbard, a Congresswoman who represents Hawaii's 2nd district, talked a lot about trying to do the things we can do, rather than continue with a hyper partisan divide that brings all policy making to a standstill.

"Let's not fight over climate change," Gabbard said. "Let's make sure we have clean air and water; let's treat each other with respect and build a bright future."

Regarding gun control, she said she would fiercely defend the 2nd amendment but drew fire from several Town Hall speakers who railed against her proposed ban on all assault weapons.

The questioner referenced New Hampshire's laws that permit assault weapons while pointing out it's listed as one of the safest states in the nation compared to Chicago which has some of the toughest guns laws and is likely the most dangerous place in America.

"I agree we have to have this conversation," Gabbard said, adding that her intent in the assault rifle ban is to reduce the amount of mass shootings where so many lives are lost in a matter of seconds due a shooter's use of such weapons.

Daniel Morel of Manchester, a U.S. citizen since 2013 after emigrating from the Dominican Republic, said he was there to hear more about her, but already signaled she had impressed him with her stance on abortion which is against having the procedure in the third trimester of pregnancy.

"I like her stance on abortion," Morel said. "I think she's the only one that has come out like that. To let a baby be born and then end its life is just crazy."

And then there was 18-year-old Eli Larabee of Gilmanton Ironworks, a fierce pro-Trumper who sat in the front row wearing his bright red "Keep America Great" hat.

"I have a special place in my heart for any Democrat who will call out people like Hillary Clinton, who is willing to be honest," he said. "I disagree with most of her policies, but she is the only voice of reason in the Democratic Party who will stand up for what she believes."