At the Milton Moose, a breath of fresh air as fraternal club goes smoke-free 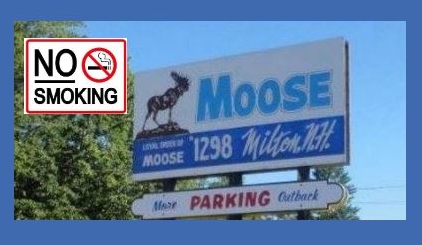 The transition began on Jan. 1 with a complete overhaul of the formerly smoke-filled social quarters. (Courtesy photo)

Editor's note: The Milton Winter Carnival begins on March 6. An earlier version of this story had the wrong date.

MILTON - A lot of Milton Moose members began breathing a sigh of relief at the start of the year.

That's because the Loyal Order of Moose International began its prohibition of all tobacco products, including e-cigs, on Jan. 1.

Milton Moose Governor Dave Barca said there was some grousing at first and it may have cut down on some of their social quarter's numbers, but in the end he said it's all for the better.

"We knew some would be upset and it might hurt social quarters business for a while, but we think once the word gets out, more local residents will want to join and it will be a net gain," Barca said earlier this week.

As part of the transition workers spent the month of January overhauling the social quarters, replacing all the carpeting and painting the walls to completely remove any semblance of smoke smell.

The two smoke eaters in the social quarters were also removed.

During the monthlong renovation the social quarters were moved to the club's function room, which is rented out to the public for weddings, birthdays and other events.

Now Barca said he's looking forward to Milton Winter Carnival weekend that begins March 6 so he can show off the nonsmoking lodge to the public, who are invited to several events at the lodge during the celebration.

In fact many smokers who frequent the social quarters have said in recent weeks they have either quit smoking or at least cut down.

At the Milton Moose smokers can still go outside for a butt, however visitors won't smell it since the area where they light up is at least 50 feet from the front entrance.