At Ugly Sweater Pub Crawl, you don't know how it'll go, but you know it'll get ugly 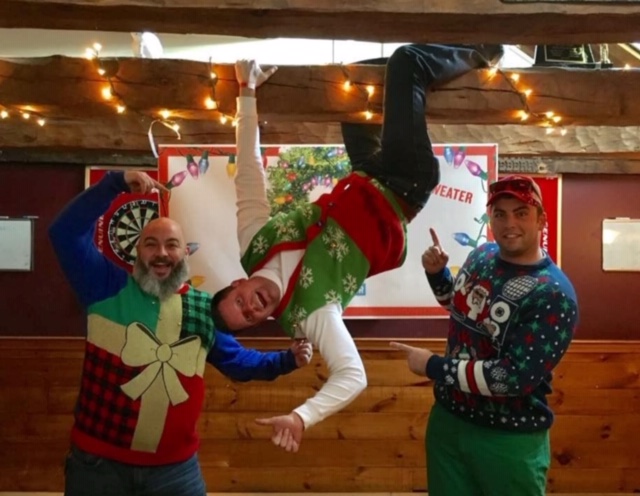 Bill Harris, Curt Connolly, and Michael Rice have some fun while hanging out at Lilac City Grille during last year's crawl. (Courtesy photo)

ROCHESTER - Beginning tomorrow will be a weekend of wonderment for the children of Rochester as the city heralds in the coming joy of the Christmas season with the lighting of the city Christmas Tree Friday night and its annual Holiday Parade on Sunday afternoon.

But betwixt and between those two august events will be something equally as joyous for the adults in the room, namely Rochester's own 4th Annual Ugly Sweater Pub Crawl.

And if his offering is any indication of what to expect on the streets of Rochester on Saturday afternoon, "it's gonna get ugly out there."

"People put in a lot of effort to have the ugliest sweater," Ejarque quipped on Tuesday. "They decorate them at home; a lot of them light up. There's a great variety."

WHEB personality Kayla Winsor said it's true. The Seacoast radio station has been part of the pub crawl for its four years of existence, and she said she's always impressed by the swath of ugly sweaters she sees here each December.

"Everyone fully commits to their ugly sweaters and different holiday gear," she said on Wednesday.

The pub crawl is sponsored for the fourth year by Boston Beer Company and features discounted $3.50 pints of Sam Adams throughout the afternoon event, which runs from 1-5 p.m. at eight downtown venues. Last year some 350 ugly sweater revelers attended the event.

Featured stops this year include The Garage and Governor's Inn, Rochester's Performance and Arts Center, which will feature a piano player; Curlies Comedy Club, Lilac City Grill, Revolution Taproom and Grill, Mitchell Hill BBQ, Radloff's Cigar Bar and On the Rox Lounge and Moe's Southwest Grill. (all within stumbling distance).

Tickets include the discounted Sam Adams pints and free appetizers at each location. They cost $10 today and Friday, $15 on Saturday, and are available at all eight locations.

Lastly, The Rochester Voice encourages everyone to enjoy the day responsibly.