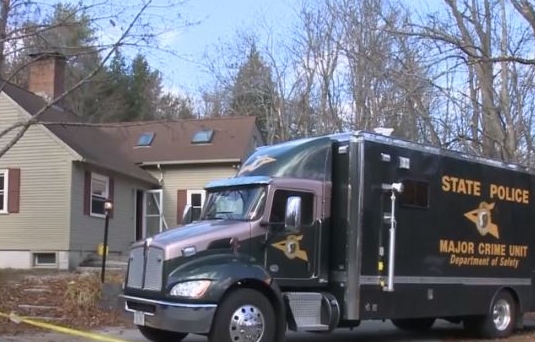 State Police investigators were at the scene much of the day on Saturday. (WMUR image)

CONCORD - An unidentified minor has been arrested in the death of an Antrim man whose body was found inside his home on Friday.

A statement from the Attorney General's office on Saturday said the autopsy on Jason Beam determined that the cause of death was multiple sharp and blunt penetrating injuries of the head, neck, and chest.

Beam, 41, was found dead at his home at 5 Gregg Lake Road in Antrim early Friday after firefighters were called to the scene to put out a fire.

Firefighters found a woman and child outside the home when they arrived, but officials say that child was not the one arrested.

Because the alleged perpetrator in this case is a juvenile, no other details will be available as the case works through the juvenile system, the AG's statement noted.

Anyone who believes they may have information about the incident is asked to contact New Hampshire State Police Sergeant William Bright at (603) 628-8477.