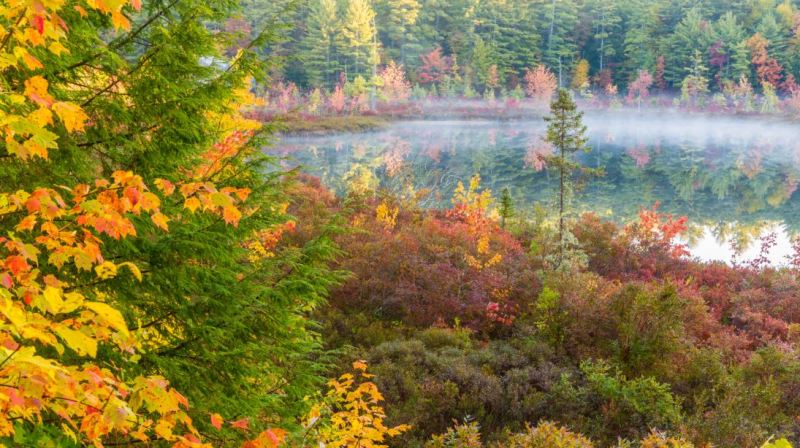 The majestic Round Pond and Little Round Pond found within the Stonehouse Forest are natural undammed ponds that resemble ponds found in New Hampshire's North Country.(Jerry Monkman photo)
BARRINGTON - The 1,500-acre Stonehouse Forest in Barrington just got one step closer to being a reality with the announcement of a $1 million federal grant from the National Coastal Wetlands Conservation Grant Program, administered by the U.S. Fish and Wildlife Service. The grant, awarded to NH Fish and Game Department, will support the Department's partnership with the Southeast Land Trust of New Hampshire to conserve this expansive and unfragmented forestland.
"This one million dollar federal grant from the National Coastal Wetlands Conservation Grant Program will help ensure that 232 acres of coastal wetlands buffered by high quality forested uplands will be available for fish and wildlife species in perpetuity," said New Hampshire Fish and Game Department Executive Director Glenn Normandeau.
N.H. Fish and Game's grant was part of more than $17 million awarded by the U.S. Fish and Wildlife Service to 20 projects in 10 coastal states to protect, restore or enhance more than 13,000 acres of coastal wetlands and adjacent upland habitats under the National Coastal Wetlands Conservation Grant Program.
"We are proud to help conserve important coastal wetlands in the Northeast like the Great Bay Estuary-Stonehouse Forest Coastal Wetlands property," said Wendi Weber, USFWS Northeast Regional Director. "Wetlands are valuable natural resources for wildlife as well as for people, providing flood protection, improved water quality, economic benefits and recreational opportunities."
Coastal wetlands in the United States include both salt marshes in estuaries and freshwater wetlands that extend inland within the coastal drainages. They play an important role in reducing flooding from storm surge and in stabilizing shorelines in the face of sea-level rise. According to a Service report, wetlands in coastal watersheds are lost at an average annual rate of 80,000 acres. Conservation of these habitats will not only benefit coastal wetland-dependent wildlife, but will also enhance flood protection and water quality, and provide economic benefits and recreational opportunities for anglers, boaters, hunters and wildlife watchers.
"We are ecstatic to get this news at the start of the year," explains Brian Hart Executive Director of SELT, an Exeter-based nonprofit that works with communities and landowners to conserve land for the benefit of people and nature. "This $1 million award demonstrates the national significance of the Stonehouse Forest and its importance to the public due to its clean water and vital wildlife habitat."
The proposed "Stonehouse Forest" is 1,500 acres of undeveloped forestland adjacent to the popular Stonehouse Pond Reservation in Barrington, owned by SELT and managed in partnership with the NH Fish and Game Department. The Stonehouse Forest lies to the east of the property, with frontage on the Franklin Pierce Highway (Route 9/202), Swain Road, Merry Hill Road, and the Nottingham town line, where it abuts the once-proposed USA Springs water bottling facility.
Through the partnership, the NH Fish and Game Department will hold a conservation easement on the Stonehouse Forest, while SELT will own and manage the land to sustain its conservation values.
The unspoiled setting of Stonehouse Forest includes large roadless and trailess areas, and also provides important wildlife habitat and natural resource values. All of the water on the Stonehouse Forest eventually reaches the Great Bay Estuary via the Wild & Scenic Lamprey River or through the Bellamy River, which is one of the drinking water sources for the City of Portsmouth. The majestic Round Pond and Little Round Pond found within the Stonehouse Forest are natural undammed ponds that resemble ponds found in New Hampshire's North Country.
At one time slated as a private exotic game hunting reserve by its European owner, the Stonehouse Forest has been posted against public access and hunting for decades, making it one of Barrington's best-kept open space secrets. Behind all of the current "no trespassing signs" sits a well-designed woods road network with beautiful stone retaining walls that afford easy access for recreation and habitat/forest management. A schedule of public tours can be found on SELT's website, www.seltnh.org.
The terrain of the Stonehouse Forest ranges from relatively flat to steep slopes, and includes small cliff faces, rock outcrops and large boulders left over from the last glaciation. This terrain provides a variety of habitat for animals including denning sites for species such as porcupine, bear, and bobcats.
With this award, SELT now has $300,000 remaining to be raised to successfully acquire, conserve, and steward the Stonehouse Forest. The total project cost is $3.45 million, which includes the purchase price, transaction costs, and funds for the long-term stewardship and management of the extensive property. The project is slated to be completed by the end of September 2017.
"The final funds will be raised through private contributions and we will now begin reaching out to area residents to ask for their personal support," Hart commented. Those interested in contributing or volunteering their time and talent may call SELT's offices at 603-778-6088 or send an email to info@seltnh.org.
For more information on the National Coastal Wetlands Conservation Grant Program, visit
https://www.fws.gov/coastal/CoastalGrants/index.html
Read more from:
Top Stories
Tags:
None
Share: