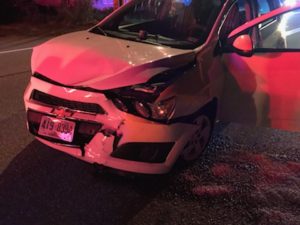 ROCHESTER - A Barrington woman was arrested for DWI after she crashed head-on into another vehicle on Brock Street just before midnight on Thursday.

Jones' vehicle sustained heavy front end damage and was towed from the scene. She was checked by EMS on scene.

Osborne sustained minor injuries and was taken to Frisbie Memorial Hospital for treatment. A minor passenger in her car was checked and released on scene by EMS.

Officers arrested Jones for aggravated driving while intoxicated, a Class B misdemeanor. She was bailed and released with a June 22 court date at Rochester District Court.

Rochester Police are asking anyone who may have information that could assist with this investigation, to call Officer Garneau at 330-7128. Tipsters can also provide information and remain anonymous by calling the Rochester Crime Line at 335-6500 or Text to: CRIMES (274637) Body of Text: TEXT4CASH + your tip. Cash rewards are offered for information that leads to an arrest.