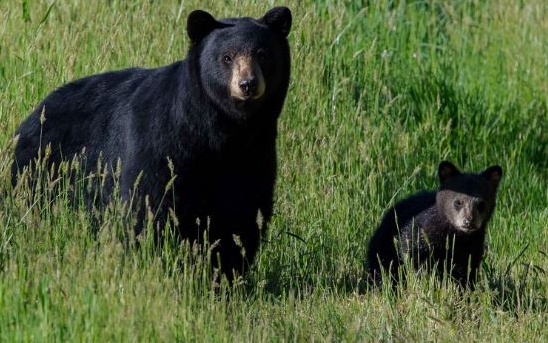 A mother bear and her cub like the two seen above were reportedly sighted in the Union Street parking lot around 11:20 p.m. on Sunday. (Courtesy photo)

ROCHESTER - Several bear sightings in the downtown last week prompted police today to warn the public they should always steer clear if they see them out and about.

Rochester Police Capt. Jason Thomas said there were several sighting last Wednesday, one in which officers gazed in disbelief as a small cub walked behind police headquarters and out toward Hanson Street. Thomas said the cub went through the old Robbins Auto Parts store and across Hanson Street into a driveway where it disappeared from view.

Other sightings on Wednesday were reported on Charles Street near Columbus Avenue and on Academy Street.

While those sighting only involved a single bear cub, Rochester Police dispatch received a call on Sunday at 11:20 p.m. for the sighting of a mother bear and her cub in the Union Street parking lot. As police went to check, more reports came in advising dispatch that a mother bear appeared to be looking for her cub near an antique store and they were later seen going behind the old Foster's building on North Main.

Thomas said whenever they hear of a sighting they contact state Fish and Game to apprise them.

Animal experts note that the presence of both a cub and its mother can prove to be a very dangerous situation as the mom will be extremely protective of her offspring.

Officials at Fish and Game were not immediately available for comment.