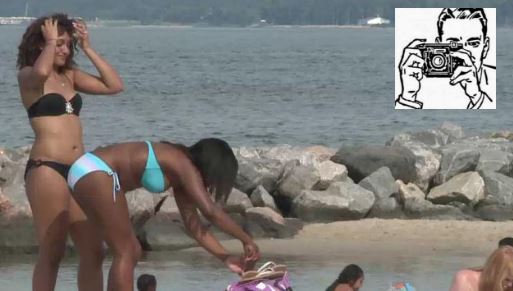 A man using a high-powered lens to take photos of bikini-clad beachgoers was banned from this Yorktown, Va., beach for a full summer. (Courtesy photo)

Female beachgoers might think that when they're out there sunbathing in a skimpy bikini on a hot summer's day they should be protected from predatory picture takers zooming in on their private parts.

"It may seem invasive, but it's not against the law," Rochester Police Capt. Gary Boudreau said recently.

A recent example of what some would call aberrant behavior occurred earlier this month at Hampton Beach.

Police there investigated a June 4 incident in which a man had installed a small camera inside a Gatorade bottle and was viewing images of at least one teenage girl that were transmitted to his smartphone.

After becoming suspicious another woman with the female being photographed confronted the man, grabbed the man's Gatorade bottle and discovered the camera inside.

Hampton Police investigated the incident and interviewed the man, but no charges were brought forward, because he had broken no laws.

Boudreau noted that was the correct call, because when you go to the beach you have no expectation of privacy.

Of course, years ago this wasn't as big a problem, he added, because the technology wasn't so readily available to be so intrusive.

To be charged with invasion of privacy, the New Hampshire RSA states a suspect must be found to be using a "device for the purpose of observing, photographing, recording, amplifying, broadcasting, or in any way transmitting images or sounds of the private body parts of a person including the genitalia, buttocks, or female breasts, or a person's body underneath that person's clothing."

A couple of years ago a man taking pictures of female beachgoers with a high-powered lens at a Virginia beach was actually banned from the beach by the local sheriff, who in that county had the authority to restrict anyone from public land.

Short of that, Boudreau says that if people observe someone pointing a camera or smartphone at them or anything else that makes them feel uncomfortable, they can simply ask the person not to do it if they feel comfortable doing so.

If the person persists, they could then call police, he said.

Another possible solution would be to move to another part of the beach.

If he follows you, he could be charged with stalking, harassment or disturbing the peace, Boudreau added.

In New Hampshire, if a person is convicted of invasion of privacy it could mean up to a year in county jail.