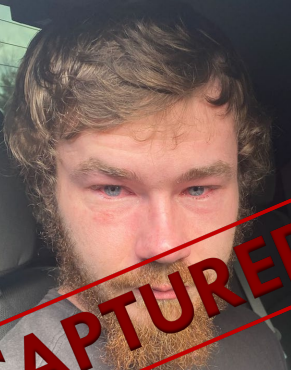 CONCORD - A Belknap County fugitive wanted in the assault of a child was taken into custody on Thursday in Lebanon, N.H.

The U.S. Marshals Fugitive Task Force captured Logan McCallister Graham at a residence on Spencer Street in Lebanon late Thursday morning despite a shortlived attempt to evade arrest by closing the door on lawmen.

As part of this search for Graham, he was featured as the "Fugitive of the Week" on Wednesday. This feature runs regularly on the state media outlets including The Rochester Voice and prominently featured on the internet.

Graham, 26, was last known to live in Laconia, where he failed to appear in the Belknap County Superior Court on a charge of 2nd degree assault on a child under the age of 13.

The arrest warrant for Graham was issued on Aug. 4 and was recently turned over to the task force to locate and arrest him.

Although Graham initially attempted to close the door on the task force and indicated he would not be arrested, he was quickly subdued and taken into custody.

Graham was transported directly to the Belknap County Jail, where he was held pending his initial court appearance.

"The task force continues to help our state, county and local task force partners throughout New Hampshire by seeking out and arresting fugitives that think they can avoid arrest by moving across the state or across the country." US Marshal Nick Willard said. "Mr. Graham did not think anyone would find him in Lebanon, but the task force proved him wrong today."