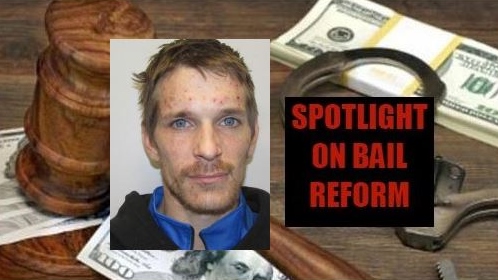 John Kimball has racked up more than a dozen arrests on bench warrant over the past couple of years for failing to appear. (Rochester Police photo)

ROCHESTER - To see the face of futility and failure in New Hampshire's bail reform law look no further than William John Kimball of Rochester, an alleged petty thief who has racked up more than a dozen arrests on bench warrant over the past couple of years for failing to appear for hearings in Rochester District Court.

Kimball, of Furbush Street, but formerly of Upper Guinea Road, Lebanon, Maine, has been arrested multiple times in both New Hampshire and Maine over the past several years but until just recently spent most of his time out of jail on personal recognizance bail, even while allegedly committing multiple additional crimes.

The state's bail reform law made its way to the governor's desk with bipartisan support. Gov. Chris Sununu signed SB 556 it into law in July 2018, but acknowledged the concerns of police and county prosecutors.

"Careful implementation will be key in ensuring the success of this effort," Gov. Sununu said in a statement following the signing. "We have listened to the concerns of the state's county attorneys, and I have confidence that our courts will be able to apply Senate Bill 556 in a manner that achieves the bill's objectives and protects public safety."

But some police and prosecutors say the value of property and the safety of law enforcement may have been compromised along the way even though additional language was incorporated into the SB 314 bail reform addendum package in April that was supposed to make it easier to hold court-hearing noshows accountable. Kimball's record shows that hasn't been the case.

In September 2018, Kimball, who had three bench warrants on him at the time, resisted arrest when he ran from an officer down Lafayette Street and was only able to be brought to submission after he was tased and tackled, a situation that obviously posed a risk to both him and the officer. All three bench warrants were for nonappearance.

Then on Jan. 4 he was spotted in the Rochester Walmart, where he was arrested on five bench warrants, including for theft by unauthorized taking, tampering with public records, unauthorized use of rental property, resisting detention and willful concealment.

In the months leading up to the January arrest Kimball was charged with willful concealment at Hannaford's on Sept. 22, and at Walmart on Oct. 23 and Nov. 10.

But after six days in jail following his Jan. 4 arrest Kimball was let go, again on personal recognizance.

In April he was arrested by Maine State Police for allegedly stealing copper piping from a bank-owned home on Route 202 in Lebanon. State Police said most of the piping had been removed from the basement where water damage from cut pipes was evident. Damage to the house was estimated in the thousands of dollars.

Kimball was most recently arrested on Sept. 7 when an employee at the Gonic Road Dunkin' Donuts called police dispatch around 3:35 a.m. to say they were afraid to open because there were three suspicious men parked in a vehicle in the store's parking lot.

When officers arrived they found Kimball inside the car. He had five bench warrants for his arrest, on five separate cases: three thefts by unauthorized taking, one for bail jumping and one for resisting arrest - from the September 2018 charge in which he was tased - as well as a fresh bail jumping charge.

Rochester Police Capt. Todd Pinkham said shortly after Kimball's most recent arrest that police were frustrated by the shortcomings of bail reform that allow a person no-cash bail as long as they aren't deemed a physical threat to the public or themselves.

Pinkham acknowledged that Kimball isn't seen as a violent criminal, "but what about personal property? What kind of value do you place on that?" he asked. "This guy has been arrested over and over again and they issue EBWs over and over. These stores he's stealing from, what about their loss? He's not learning and reoffending at a regular pace."

Pinkham said Kimball had four EBW arrests in 2017. He said it's been more than a year since Kimball was arrested for resisting arrest, and he still hasn't been to court on that charge.

Strafford County Attorney Tom Velardi said the largesse bail reform has shown reoffenders "illustrates that the law makes it difficult to hold people who don't appear for their hearing."

"There's a blind spot (in the law), because they're not showing a 'dangerous' by not showing up," he said.

Velardi said the state's courts are now clogged with bail hearings, as those seem to be the only way no-shows can be held accountable.

"This is grinding courtrooms to a halt, because judges have no other tool to hold them," Velardi said today.

Scherr disputes Velardi's claims that suspects are failing to appear for court hearings and reoffending while out on bail in larger numbers.

"Not a single county attorney would agree with (Velardi's) claims," Scherr added.

However, Velardi disputes that notion, saying that county attorneys across the state are frustrated with the negative ripple effects bail reform has produced.

Velardi, who serves on a study panel that reports back to the legislature in November on possible tweaks, said his proposal would be to give judges the ability to order reoffenders to use an ankle bracelet or mandate telephonic supervision to guarantee they show up for their next court date.

"These conditions I have proposed are not onerous," Velardi added," and we need them. Right now we're having bail hearing every Monday, Wednesday and Friday: three mornings set aside. I've never seen such a thing."

He'll be there for that. He's been held at Strafford County Jail on no bail since Sept. 7 per order of District Court Judge Edwin Kelly.

The Rochester Voice's request for comment from Gov. Sununu regarding Velardi's specific concerns went unanswered, but his spokesman Ben Vihstadt said the governor, "is always open to reforming the law further in the future."