Bill that forces removal of horse manure a load of nonsense, and dangerous, too 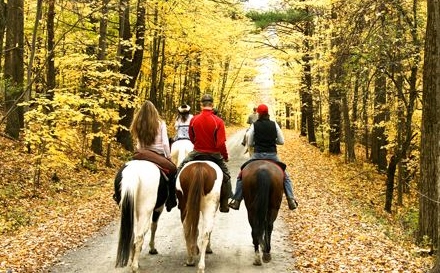 Riders on a trail would have to dismount to remove manure every time it was produced. (Courtesy photo)

I am writing in regard to NH House Bill 296-FN, a bill relative to animal waste cleanup in state forests and state parks introduced by Rep. Harrington, Strafford District 3. If passed, this bill would require anyone bringing an animal into a state park or state forest to "clean up or remove all solid waste produced by such animal" (i.e., manure).
As one who rides horseback and walks goats and dogs at Fox State Forest in Hillsborough and other state-owned lands, the proposed bill concerns me. While I agree it is desirable to clean up animal dung whenever and wherever possible, there are times it is impractical and even dangerous to do so. Dog poo is easy to scoop and bag (though the plastic bags themselves virtually encase the poo for eternity in a landfill somewhere); horse and especially goat manure (which is like that of white-tailed deer) is not.

The bill appears to me to be a solution in search of a problem. Of the hundreds of miles of trails on state land in NH, a small percentage is actually ridden by horseback riders. In fact, the equestrian community would like to see more trails and facilities for trail riding. The NH Horse Council and others have been working closely with the Division of Forests & Lands for many years to make that happen. To his credit, Director Bryce has been supportive but funding and staff for planning, design and construction are nearly non-existent.
Allow me to offer a bit of background... While few in number, equestrians churn a huge amount of money through the local economy. Demographically, we are overwhelmingly women "of a certain age." As our families will testify, most of us care more about our animals than near anything else and we are damn-near broke physically, spiritually and monetarily trying to keep them all healthy and happy. Our dollars flow through and support a host of small businesses, including:
- Farriers
- Veterinarians
- Farm owners & boarding facilities
- Hay growers
- Feed stores
- Equipment operators (mowing, seeding, fertilizer, bush-hogging, fencing, excavation)
- Tack shops
- Barn builders
- Camps & campgrounds
- Truck and trailer dealerships, and more.

We generally accept the hand fate deals us and our animals with requisite smiles or tears. However, when someone complains about an occasional pile of manure on the road or trail (often speeding by, swearing or giving us the middle finger), we get piqued, a bit defensive, and just plain frustrated. First, because we do our best to go along and get along with others and, second, because we deal with it every day, literally (shoveling, carting, piling, composting, spreading) and metaphorically. The sad fact is, there are just fewer and fewer safe places to ride our horses.
The bill as written is impractical because, other than at parking lots, it's unenforceable. The Division of Forests & Lands doesn't have the staff or personnel to monitor every mile of trail on state land. Even if a hiker were to photograph or videotape an equestrian, the department doesn't have the time or means of tracking that rider down to cite them. The agency has more pressing matters with which to attend. In all likelihood, it would cost more in terms of staff time etc. for the Division of Forests and Lands to hunt down, process and collect fines than would be generated thereby placing an even bigger burden on an agency that's struggling. It makes no sense. (Moreover, unless the division is going to make biodegradable poop bags available, it may actually be making matters worse in the long run in so far as the environment is concerned.)
NH House Bill 296-FN as written is dangerous because it puts riders at risk. One of the riskiest times a rider faces is when mounting. When mounting, a rider is on the ground in very close proximity to the much larger horse. The rider may have one foot up and in the stirrup meaning she doesn't yet have her legs, seat, or reins to communicate with her horse. It's a moment of supreme trust in one's horse and it's at this time that she is most vulnerable to being trampled and/or dragged. Most riders avoid mounting and dismounting unnecessarily; not because we are lazy, but to avoid getting hurt. Getting off and on a horse each time a horse poops to either kick or shovel it off the trail is frankly not worth the risk of getting seriously injured. Speaking as one who's been injured and rescued and having paid in ways incalculable, I say, "Let the pile of dung be." In a few days and with a bit of rain, it will disintegrate to help build forest soils and stabilize the trail. Horse and goat dung is not pathogenic or toxic and won't harm people or pets. Moreover, horse dung is usually pretty visible and therefore easily avoided in one doesn't want to step in it.
Lastly, I predict that given the age of most trail riders, in a few short years manure on trails is likely to be a non-issue as current trail riders "age-out of the sport" (i.e. we'll be dead). Sadly, there are very few young trail riders coming up behind us. As you know all too well, young people in NH are struggling to pay off loans, pay bills, and raise families - they simply don't have the time or resources to keep, much less ride, horses. It's a sport that's popular but declining in participation. This is an issue in the equine world as a whole.
I hope that in light of the foregoing that NH legislators will agree that the proposed bill is unnecessary, impractical, and potentially dangerous. Thank you for hearing me out