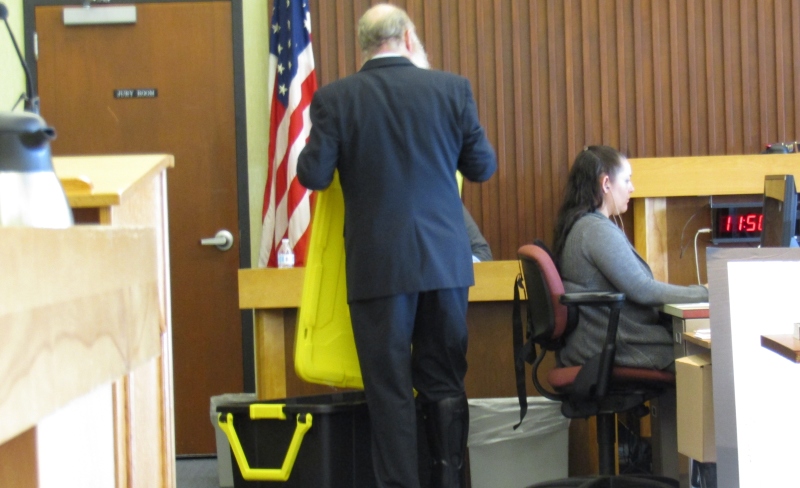 Defense counsel looks back at the bench while entering a yellow storage bin into evidence on Monday at Strafford County Superior Court in Dover. (Rochester Voice photos)

DOVER - It was thought the trial of a Maine man accused of exposing and touching himself in front of two young girls at the Somersworth Walmart would be finished Monday, but instead of closing arguments the jury saw "bins" entered into evidence and watched glassy eyed as more than an hour's worth of unnarrated raw Walmart surveillance video followed the defendant's footsteps in the store the afternoon of the incident.

Christopher T. Dastrup, 34, of South Berwick, Maine, faces up to 60 years in prison if convicted on all four counts of indecent exposure/lewdness: two for exposing himself and two for touching his genitals in front of the girls, who were age 11 and 5 at the time of the incident.

The only witness of the day was Brian Howard, the assistant manager at Walmart on Sept. 28, 2017, who testified for several minutes about how the bins were stacked for sale, their size and how some of the aisles provided opaque separators.

Defense counsel Sven Wiberg said he felt there had been some confusion about whether the bins referred to in testimony were bins in which Walmart placed items for sale rather than storage bins consumers used to store household belonging.

After the bins were entered into evidence Wiberg pivoted to a request to play back portions of some 20 Walmart surveillance files, which set off a firestorm inside the courtroom between him, Judge Mark S. Howard and Deputy Strafford County Attorney Tim Sullivan, who objected to the move, saying it was violation of discovery, which calls for any evidence to have been supplied to the prosecution 60 days prior to trial.

As Judge Howard seemed to reflect his concern that it was a violation of discovery, Wiberg fired back, "You've been critical of me all trial."

Judge Howard took great exception to Wiberg's characterization, but ultimately allowed him to play back the video files, without narration, after Wiberg complained he couldn't have submitted the evidence earlier because he couldn't open the files due to a computer glitch with his software.

A compilation video produced by the FBI that followed Dastrup through the store and matched it up with the girls when they were in his proximity has already been shown to the jury.

So for about an hour and a quarter the jury and courtroom watched in stone silence as Wiberg played the videos which were projected onto a screen on the other side of the courtroom as Dastrup, a registered sex offender in the state of Maine, sat emotionless behind the screen.

As each of the 20 or so video clips began Wiberg would announced the timeframe but nothing else.

When Wiberg wrapped up the video session around 4 p.m. Judge Howard excused the jury and asked Wiberg if Dastrup intended to testify on his own behalf. Dastrup said no.

Wiberg ended the day by urging the court to pick a jury foreman by lottery, rather than by having the jury pick its own as is normally done in Strafford County Superior Court.