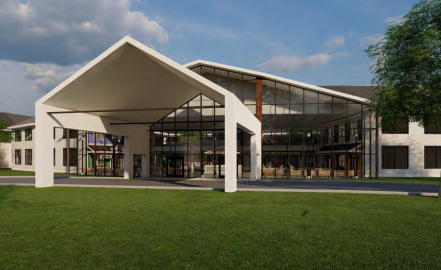 Editor's note: The Strafford Delegation is mulling a proposal that would replace Riverside Rest Home in Dover with a $170 million dollar facility. The price tag was incorrect in Friday's headline. The Rochester Voice apologizes for the error.

DOVER - A bipartisan group of Strafford Delegation members put the brakes on a breathtaking $170 million price tag for a conceptually beautiful, grandiose county nursing home in Dover that would feature its own theater, game room, pub and post office.
The delegation voted on Wednesday 21-13 in favor of the deal, but didn't meet the two-thirds threshold to push the project forward.

Delegation members opposing the project said the dearth of details is what gave them grave concerns.
"All we got was three sentences and a cartoon," said Rep. Cliff Newton, R-Rochester, District 9), referring to an architectural firm's rendering that showed little substance.
The estimated project costs were summed up in three brief line items as follows:
Site preparation costs: $3.6 million
Building construction and design: $156.9 million
Equipment/facilities: $9.5 million
Rep. Fenton Groen (R-Rochester, District 23), said the lack of detail in the estimate was a deal-breaker for him.
"When we voted in May to authorize the commission to select a request for proposal I voted for it," Groen said on Thursday. "I was surprised to get notice of meeting asking for $170 million in under three months."

A longtime commercial builder, Groen said in his experience that process always takes at least a year.
"It was a very very rudimentary preliminary concept," he added. "There was not enough information, and I couldn't in good conscience vote for it. We need good information."
He said the current plans and renderings depict a more grandiose nursing home than most of their privately run counterparts, singling out Langdon Place in Dover as one of the more exclusive.
"We don't need a Taj Mahal," he said.
He also said smart buyers looking to build usually utilize "value engineering," a concept wherein an architect might come up with a proposal to build a facility for $3 million.
With value engineering, the person wanting to build then says, "I need it built for $2.5 million, so you might go from all toilet being automatic flushing to non-automatic," Groen said. "At least 15 percent savings is possible by doing this."
So when some from the delegation use Gov. Sununu's threat to cut off some $25 million in ARPA funds if they don't OK the $170 million deal by Sept. 9, Groen is not worried. He's sure that much can be saved by paring back some of the grandiose plans features and implementing value engineering principles.

Groen, as well as Newton and Rep. Len Turcotte. R-Barrington, District 4, who also voted against the $170 million price tag, are all agreed that the county needs a new nursing home, but perhaps not quite so pricy.
They also believe in doing this one thing at a time, and the new nursing home should come first, before even contemplating repurposing the old nursing home into a permanent homeless shelter.
Turcotte said just doing the basic math shows each bed costing some $790,000.
He also said the $513 cost per square foot quoted in the current cost comparison is way too exorbitant, adding that in California he's seen rates a little over $200. He also agrees the proposal is for a facility far too gradiose.
The lone Democrat vote with the Republicans was Casey Conley, Dover District 13.
The delegation will meet again on Sept. 6 to see if they can compromise ahead of the Sununu's Sept. 9 deadline threat.

The Rochester Voice reached out to Rep. Chuck Grassie, D-Rochester, District 11, who voted for the project; and Conley, but they were not available for comment.

Members Opinions:
Steve_Beaudoin
[Delete]
$1.7 mm of the funding used to offset the annual cost of the facility is derived from revenues generated from a 74 acre solar farm. There is no plan in place to fund the endeavor.
louie
[Delete]
Steve B.
Regardless how large this Solar Farm is, these panels have only a 25 year life expectancy.
Should ANY be damaged/destroyed on site, they become Hazardous Material.
As of yet, there are NO Plans in place or ability to properly dispose of them as NOTHING is recyclable.

So far....It's to be left for future generations to figure out....

PS: I believe the Swimming Pool was left out of the article