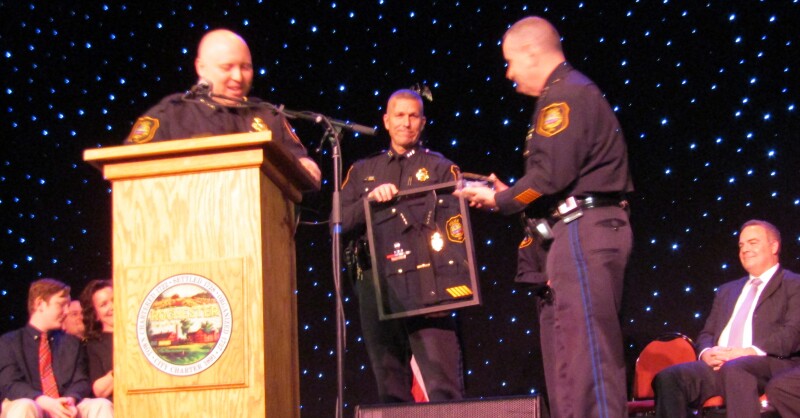 ROCHESTER - There was plenty of pomp and circumstance at Thursday's Changing of the Guard ceremony at the Rochester Opera House.

But there was also a lot of pride, camaraderie, reflection and laughter, too, as the city officially recognized the passing of the law enforcement torch from retiring Chief Paul Toussaint to incoming Chief Gary Boudreau.

Toussaint, who served with Rochester Police more than 25 years including the last five as chief, drew some of the loudest laughs while describing how technology had impacted his department through the years, not always for the better.

In describing the sometimes flawed use of cruiser voice commands he remarked how when out on patrol late at night, "you'd be driving through a neighborhood and say 'left alley' to turn on a light that shines out the left side of the cruiser and then you'd hear 'siren on' and wake up the whole neighborhood."

Toussaint said when he started in 1996, after every call or traffic stop, they had to put pen to paper and physically write it out.

He then used some of his well-known quiet satire to poke a little fun at his rank and file.

"Yeah now all the cruisers have MDTs (mobile data terminals) and they can now just sit in their cruises and enter in their reports.

"And we all know officers love sitting in their cruiser and doing their reports," he quipped.

He also said the addition of tasers has proved beneficial for both police and subjects.

"Tasers are not abused on this department, and they prevent injuries to police and subjects," he said. "And soon we'll have body cameras, which we need now, and they'll show our officers during the right thing.

"Our cops are the best, no matter the call and whatever the call, they never say, 'It's not my job!'"

During his remarks Boudreau noted that leading up to this propitious day he and his boss had argued over whose day it was going to be, his or Toussaint's.

"Chief Toussaint was a steadfast champion of the department and city, and had the utmost in integrity and being goal driven," Boudreau said. "And many of you may not know, but he does have a sense of humor with more than a hint of sarcasm."

Boudreau, a Rochester native, has been with the Rochester Police Department for 24 years, taking over as Deputy Chief in 2017. Over the course of his career, Boudreau served as a Patrol Officer, DARE Officer, School Resource Officer, Evidence Technician, Patrol Supervisor, Patrol and Support Division Commander, and Commander of the Strafford County Tactical Team.

Moving up to deputy chief will be Capt. Jason Thomas, who started his career in the Rochester Police Explorer program while a teenager at Spaulding High School. He's held several positions since, including Communications Specialist, Patrol Officer, Training Coordinator, Sergeant, Lieutenant. He was promoted to captain in 2016.

Rochester Police Commissioner David R. Stevens remarked that the city was ideally situated for this change of command in that both Toussaint and Boudreau have spent their entire careers in law enforcement in Rochester.

Boudreau also thanked Toussaint for his mentorship, adding that if it weren't for him he wouldn't be Rochester's newest police chief.

Boudreau said he sort of did a double take and laughed it off like yeah, that'd be the day!