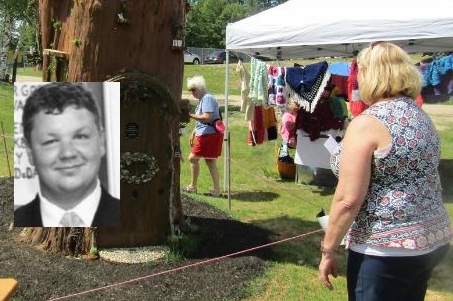 Brady Brown, who was lost to a Grand Mal seizure in October at the age of just 28, will hold a permanent presence on the impressive structure in the form of a glass encased display featuring a "Guardian Angel" coin and a blue gnome near the bottom of the tree.

Mary Bezine of Milton, who along with three helpers spent some 180 hours putting the elaborate Fairy House together, said she and Brown decided to let Brady have a special place inside the Fairy House after they mysteriously found the "Guardian Angel" coin under the tree.

"We decided it must have been there for Brady," Bezine said.

"He's here, he'll always be here keeping an eye on the Fairy House," said an emotional Brown pointing to the blue gnome.

Brady Brown, known for his big smile, was a hugely popular fixture at the Milton Road Market Basket where he worked for 15 years prior to his death.

The dedication of the Fairy House takes place at 1 p.m. with Milton Selectman Andy Rawson in attendance followed by a Fairy House blessing by the Rev. Joseph Anaman of the Community Church of Milton.